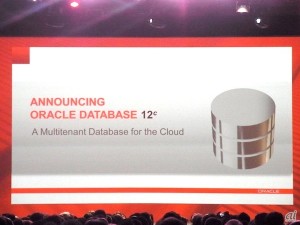 Download links for the product were available on the site as of late Tuesday.

While it wasn’t immediately clear when Oracle will hold a formal launch for 12c, earlier Tuesday a company official said the release would come “within a couple of weeks.”

At one point it appeared 12c would arrive much sooner than now. Word leaked early this year that beta testing had been completed and a release was imminent, but ultimately one never occurred.

Database 12c includes a feature Oracle has called “pluggable databases”, which allows a single Oracle database instance to hold many other databases, allowing for more efficient use of system resources and easier management.

Oracle has also positioned pluggable databases as a better way to achieve multi-tenancy for cloud applications.

SaaS (software as a service) vendors have typically used multi-tenancy at the application level, in which multiple customers share a single application instance while their data is kept apart. Pushing multi-tenancy down to the database layer provides better security and other advantages, according to Oracle CEO Larry Ellison.

The multi-tenancy capability will be sold as a separate option, and not received as part of customers’ regular annual maintenance fees, Ellison said during last week’s Oracle earnings call.