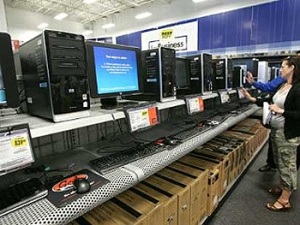 Weakness in the global economy, component shortages, sluggish demand for Windows 8 and the popularity of tablets all contributed to another double-digit percentage decline for the global PC market in the second quarter.

PC shipments in the period from April to June totalled 75.6 million units, down 11.4 percent from the same quarter in 2012, research firm IDC said on Wednesday.

The numbers include desktop, laptop, mini-notebook and workstation sales and exclude those of tablet computers.

If there was any good news in the figures, it was that the decline was marginally less bad than the 11.7 percent drop that IDC had initially predicted, though that won’t be much comfort to PC vendors.

All five of the top vendors sold fewer PCs globally than they did in the same quarter a year earlier, although a few increased their market share against competitors.

Looking ahead, IDC expects the rate of decline to slow but doesn’t expect shipments to increase again until at least 2015.

“There’s been a lot going on,” said Loren Loverde, vice president of PC tracker research at IDC, in a telephone interview. “Economic weakness has continued in Europe, it’s worsening in Asia and not making much progress in the US.”

“The good news is that the US has improved quite a bit,” he said.

The US PC market saw a 1.9 percent decline in the second quarter – a drop for sure, but better than the double-digit declines of recent quarters. The wider availability of Windows 8 PCs and the migration from Windows XP to Windows 7 both contributed to the smaller decline.

HP remained the number-one PC maker in the US, though its lead over second-place Dell narrowed considerably. What had been a lead of more than half a million PCs a year ago shrunk to just under 200,000 in the second quarter of 2013, as HP saw a decline in shipments and Dell was the sole top-five vendor to see shipments increase.

HP ended the quarter with US sales of 4 million units and Dell with 3.8 million. Together, the two companies account for more than half of the entire 15.6 million-unit US PC market.

Globally, Lenovo moved into the top spot for PC shipments. HP had led during the same period in 2012, but Lenovo managed to expand sales outside of Asia Pacific to boost its second-quarter shipments to 12.6 million. That was still a decline from a year earlier, but a much smaller decline than those of its competitors.

Among the top five vendors, fourth-place Acer saw the biggest declines. Its shipments dropped by a third from a year earlier as consumer demand for its PCs and particularly its mini-notebook computers collapsed. Demand has also been slow for its Ultrabook machines, IDC said.

IDC rival Gartner also reported its PC shipment figures Wednesday and put the global market at 76 million units, down 10.9 percent on the year.

“This marks the fifth consecutive quarter of declining shipments, which is the longest duration of decline in the PC market’s history,” Gartner said in a statement.

The company’s estimates were released at around the same time as IDC’s and largely mirrored its observations on the market.