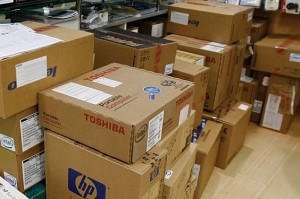 Worldwide PC shipments dropped in 2012 on an annual basis for the first time in more than a decade and that is expected to continue this year, research firm IDC said on Monday.

Worldwide PC shipments are projected to drop 1.3 percent this year, IDC said in a statement. That would be a slight recovery from 2012, in which PC shipments dropped by 3.7 percent.

IDC cited the growing use of tablets and people holding back on PC upgrades because they don’t want Windows 8 as reasons for the expected shipments drop. Windows 8, released last October, failed to provide a spark to the PC market in last year’s fourth quarter and the trend will continue through 2013, IDC said.

Windows 8 is optimised for touch, but a lack of touch PCs and high prices hurt demand in last year’s fourth quarter. There will continue to be a limited supply of computers that take advantage of Windows 8’s features, which will hurt PC shipments in the first half, IDC said.

IDC is projecting PC shipments to record positive growth in the second half with wider acceptance of Windows 8 and PC supplies returning to normal. Support for Windows XP ends later this year and that could prompt some companies to upgrade PCs, IDC said.

Intel is backing the concept of ultrabooks, a new category of thin-and-light laptops with tablet-like features, as a way to rejuvenate the PC market. The company has invested millions of dollars in the development of ultrabook components such as touchscreens, with the aim of bringing the price of those laptops down.

PC shipments in emerging markets will grow by 0.6 percent in 2013, and will decline in mature markets by 4 percent, IDC said.