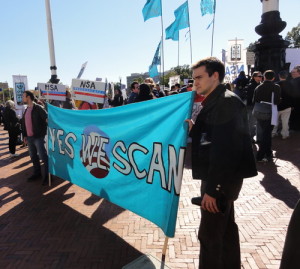 A crowd of about 5,000 people, chanting “stop spying, stop lying” and “hey, ho, mass surveillance has got to go,” marched through Washington DC Saturday to protest the US National Security Agency’s mass surveillance programmes unveiled in press reports this year.

Protesters, from a seemingly wide range of political beliefs, called on the US Congress and President Barack Obama to end mass data collection and surveillance by the NSA.

“The government has granted itself power that it does not have,” said former New Mexico Governor Gary Johnson, the 2012 Libertarian Party candidate for US president. “We have to stand against this.”

Hundreds in the crowd held signs or wore stickers thanking Edward Snowden, the former NSA contractor whose leaks to news organisations exposed mass surveillance and data collection programs at the spy agency. Others held signs with the text of the Fourth Amendment to the US Constitution, which protests residents against unreasonable searches and seizures.

Another popular sticker, from anti-war group Code Pink, featured lipstick marks and the message, “Make out, not war.”

Many politicians want people to believe that a small group of people can’t make a difference in the US government, said Craig Aaron, president and CEO of digital rights group Free Press. “It’s not such a small group,” he told the crowd. “There are millions of people siding with us.”

The rally, organised by the StopWatching.us coalition, was held on the 12th anniversary of the date former US President George W. Bush signed the controversial Patriot Act into law. The NSA has used portions of the Patriot Act as the foundation for its mass surveillance programmes. Protests were also scheduled in a handful of other cities in the US and Germany.

The NSA and members of the Obama administration have defended the data collection and surveillance programmes as necessary to protect the US against terrorism. While the NSA collects phone records in bulk, the agency only obtains content for phone calls when it suspects criminal activity, Obama administration officials have said. 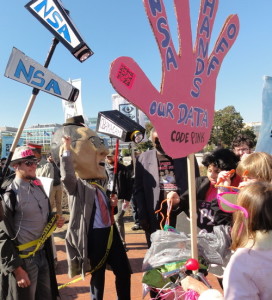 Rally attendees said it was important for them to be at the event, although some were unsure if it would make a difference.

Showing up at the rally was a way of “doing something” instead of just complaining about the NSA, said Lauren Schreiber, community outreach and event coordinator at the Council on American Islamic Relations in Washington DC.

The Muslim community in the US has long been the target of surveillance, she noted. “I feel like if the government doesn’t respect the very basic right of privacy, then all of our other rights are going to be trampled,” she said.

Paul Charnetzki IV traveled to Washington from Chicago to attend the rally. He’s opposed to the increased surveillance in the US since the September 11, 2001, terrorist attacks on the US, he said.

Asked if the rally would make a difference, Charnetzki said, “Who knows?” He talked to a staffer at his congressman’s office before the rally, and the staffer questioned if he was an extremist, he said.

“It got a little tense in there,” he added.

The US government needs to return to the protections of the Fourth Amendment, added John Lambert, from central Virginia. The US government also needs to stop its surveillance on foreign leaders, he said, noting news reports this week.

“Spying on Americans without warrants is illegal,” he said. “Spying on allies is just stupid.”