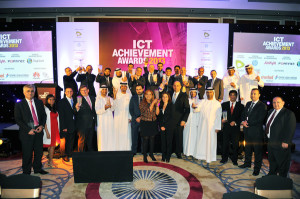 The event, now a main fixture on the region’s technology calendar, was in its fourth edition, and as usual, it celebrated the best and the brightest deployments of technology over the past year. Winners for the evening were picked by an expert panel of judges.

The ceremony started out with the vendor awards, which saw firms such as SAP, EMC and Fortinet take to the stage for a slice of glory. Meanwhille, Brocade saw success as the hardware vendor of the year, and Injazat Data Systems picked up the managed services provider of the year award. Alrowad IT Solutions were given the award for systems integrator of the year.

After a short break, the ceremony continued on to cover what everyone had really been waiting for – the end-user awards. The aim of the awards is to celebrate the regional CIOs and IT teams that have pushed the boundaries of technological innovation, creating real impact on their businesses’ bottom lines, and greatly improving customer experience.

As the winners were called out, they were greeted with rapturous applause. And rightly so – the deployments this year showed wonderful uses of technology in business. And after a long first day at GITEX, it was only right that everyone let their hair down a little to congratulate themselves.

Hardware vendor of the year: Brocade

Software vendor of the year: SAP

Systems integrator of the year: ALROWAD IT Solutions

Hospitality and tourism project of the year: Jumeirah Group

Construction and real estate deployment of the year: Aldar Properties

IT team of the year: Aluminium Bahrain