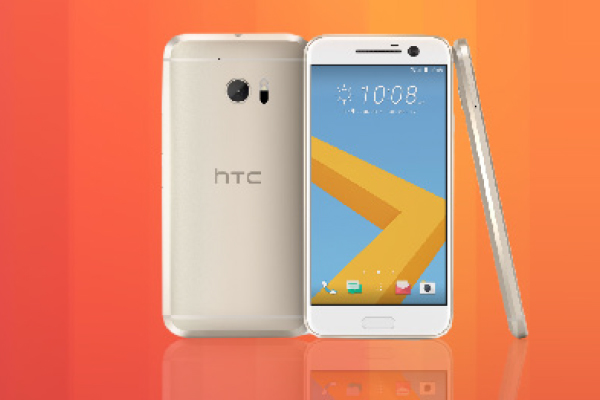 HTC 10 comes packed with the latest and best available hardware options – Qualcom 820 SnapDragon chipset and the Adreno 530 GPU ensure the device is snappy and responsive.

Unveiled in April this year, HTC’s flagship product has made noticeable waves in the smartphone market. The company has made sure to enhance all its features from its predecessor to offer quite a solid device.

The Boom Sound speakers have been replaced with a primary speaker on the top of the phone and an amp at the bottom of the phone beside the USB Type-C port, improving the sound quality greatly. The overall design of the phone is similar to the previous M9 device, however, the chamfered edges and the curved back are features that distinguishes the M10. That being said, the device is not as sleek as some of its competitors in the market.

HTC had made the move from mega pixels to ultra pixels with the M9 and have extended that to the new device as well. The primary is a 12 Ultra Pixel, laser autofocus camera while the front facing camera is rated at 5MP, and claims to be the world’s first with OIS – Optical Image Stabilisation enables users to take much better selfies. Overall, the images taken with the device were indeed crisp and displayed true vibrant colours.

Users could buy this device for the display alone. The display, at 5.2 inch LCD5, is a piece of hardware that promises quicker response times. Wrapped in Gorilla Glass 4 and a pixel count of 565 pixels per inch (pixel density) the display looks pretty neat. The fingerprint sensor to unlock the phone is very responsive and gives instant access to the device.

To run a great phone with a great display, a strong battery is needed. At 3000 mAh it’s the same size as the S7, however, HTC claims to have optimised the battery to stay cooler and run more efficiently. Charging up to 50 percent takes around 30 minutes, and can last up to a day as well, provided you use the USB Type-C charger that the company provides in the box.

While the hardware of most mobile phones is almost identical, it is the software that truly differentiates it from today’s Android devices.

HTC has moved away from the old Sense UI design and bloat ware that most customers did not prefer. This time round, HTC has gone with the best of both worlds. It has retained many Google apps while getting rid of some its native apps and vice versa, depending on which functions better. This is one of the most welcomed improvements from a customer’s point of view, as using the phone becomes much more hassle-free.

Along with a great camera, excellent sound, user-friendly interface, HTC also gives the option to customise the device. Customers can download some fun themes and personalise it as per preference. This also enables the users to have a completely different feel from other smartphones.

All in all, HTC 10 is one of the most solid phones available in the market today and is definitely worth every dollar spent.