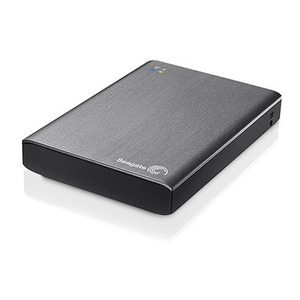 It’s difficult to differentiate yourself in the external hard drive market. After all, if you’ve got a standard 1TB WD Passport, for example, and you’re happy with it, why would you go for anything else when you need more space?

That’s why brands have been at pains to add a little more to their hard drive offerings. Now, they come bundled with media players, automatic back-up software and Wi-Fi connectivity. Of course, all this tech raises the price of the units, but customers seem willing to fork out the cash for the added capabilities.

Seagate’s new Wireless Plus hard drive should do relatively well, then – on the face of it, at least. A sleek, good-looking unit, it packs 1TB of storage space, Wi-Fi and Apple AirPlay connectivity, a 10-hour battery life, and a killer app on which to stream and manage media. It’s the spiritual successor to last year’s GoFlex Satellite, so how much has Seagate improved over the past 12 months?

Well, on its Middle Eastern launch, Seagate championed the Wireless Plus as a sort of ultimate portable media player, but the firm has only made moderate improvements on the basics of the device. It’s still Wi-Fi-enabled, it’s still a 1TB hard drive, and it still supports on-board battery power. The Plus might be a little lighter than its predecessor, but it still weighs 256 grams, which is a noticeable amount to be carrying around in a bag.

That said, there’s no reason to diss the features. The Wi-Fi reach is good enough to cover an entire medium-sized apartment, and during my test, I saw no reason to doubt the claimed 10-hour battery life. What’s more, that’s a big improvement over the GoFlex’s six hours.

You can connect up to eight different devices over Wi-Fi with iPads, iPhones, Androids or laptops – whatever you want. Each device can stream different files at the same time, though if more than three devices watch separate movies, the streaming speeds begin to suffer. Still, you could quite happily fetch photos or Word documents from the drive without affecting anyone else watching a film.

Everything is done through the new Seagate Media app – available for free on the Apple App Store, Google Play store. I’ve been told you can also get the app on your Samsung smart TV – if you have one, which I don’t. Simply turn the Plus on, find the network from your Wi-Fi network list, connect, and open the app. If you’re using a PC, you just open your browser and you get taken to the same central dashboard that’s displayed with the app.

“Ah-ha,” you may be thinking. “If I connect to the Plus’s network, I’ll no longer be connected to my home or office network, meaning I won’t have Internet access.”

You’d be right about that. Happily, there’s a drop-down bar contained in the central dashboard. Here, you’ll find a list of available networks, and you’ll be able to connect to your network through the hard drive. To be honest, I didn’t really like having to do that, but I’m not sure how else Seagate could do it. As things stand, this is what you’re looking at.

Back on the dashboard’s home screen, you can view either video, audio or picture files in alphabetical order. Files that are playable on whichever device you’re using come up in blue, while others – like AVI videos on an iPad – come up in red.

If, like me, your hard drive is organised meticulously into folders and sub-folders and more sub-folders, this alphabetical view is annoying, because it just takes everything you’ve got and dumps it onto one screen. Happily, a folder view is available – it’ll just take a bit of searching to find it. Once you’ve picked your file, streaming is no issue whatsoever – the system works great.

You can upload to the Plus via Wi-Fi – something that the GoFlex can’t do. But, to be honest, it’s not the fastest way of doing things, particularly when your wired option is USB 3.0. Best to load up the files before a big journey, and simply use the device to stream content.

There isn’t much to fault the Wireless Plus for – it does exactly what it says on the tin at a price of just Dh799. Given that’s what some firms charge for their standard hard drives, I’d say that the Plus, with Seagate’s fantastic media player, has found the perfect way to differentiate itself from the competition.