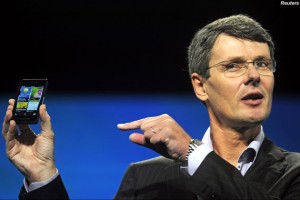 Research In Motion will launch BlackBerry 10 and the two first smartphones based on the operating system on Jan. 30, the company said yesterday.

The event will happen simultaneously in multiple countries around the world, according to RIM. The operating system was originally due sometime before the end of the year.

There is no doubt that the new operating system and the related products will be very important for the future of the struggling smartphone vendor.

“It is not just important, it will determine RIM’s future. A failure will be the end of the company, so there is no room for mistakes,” said Malik Saadi, principal analyst at Informa Telecoms & Media.

The company has seen its market share dwindle in during the last couple of year, and was the third largest smartphone vendor in the world with a 4.3 percent market share during the third quarter, down from 9.6 percent a year ago. The company still had 80 million active users during the quarter that ended Sept. 1, which was an increase, RIM said when it announced its quarterly financials.

By starting from the ground up with a touch-based user interface, the company thinks it can once again become competitive with Apple’s iPhones and the Android camp led by Samsung Electronics on device sales.

RIM is still a force to be reckoned with in the enterprise and developing countries, even though it has lost market share to Apple in particular. The key differentiator is still email and messaging, according to Saadi.

“But I doubt very much that consumers in developed countries will switch to BlackBerry 10 from an iPhone or Android,” said Saadi.

RIM will announce a touchscreen smartphone and one that combines a touchscreen and a physical QWERTY keyboard on Jan. 30, Saadi expects. The screen on the QWERTY device will be larger than on previous phones, he said.

The devices will also be a showcase for potential licensees of the BlackBerry 10 platform, according to Saadi.

Some key features of the upcoming new BlackBerry 10 have already been unveiled, including the BlackBerry Hub and Balance.

All messages, notifications, feeds, and calendar events are gathered in the Hub and no matter what users are doing with the device, they can access the Hub at any time with a simple gesture.

BlackBerry Balance allows users to switch between a personal and an enterprise part of the phone, which are separated down to the file level. At the recent BlackBerry Jam event in London it was one the featuresthat impressed the audience the most.

BlackBerry 10 also recently got FIPS 140-2 certification. That means government agencies will be able to deploy BlackBerry 10 smartphones when they are launched. It’s the first time BlackBerry products have been certified ahead of their launch, according to RIM.

Also, BlackBerry 10 smartphones have now entered more than 50 carrier labs for testing, with many more entries expected in the coming weeks.