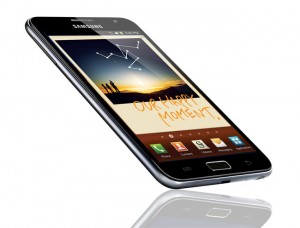 Samsung today announced that the Galaxy Note has sold 5 million units worldwide, putting the company on pace to exceed its goal of 10 million sold by the end of the year.

The device, which Samsung showed off at the Consumer Electronics Show in Las Vegas this year, is Samsung’s attempt to create a device that’s sized somewhere between a smartphone and a tablet, featuring a 5.3-inch HD Super AMOLED screen with a resolution of 1280×800 pixels.

The Galaxy Note has largely flown under the radar since its release in the United States as more media attention has been focused on Apple’s new iPad and on low-cost Android-based tablets such as Amazon’s $199 Kindle Fire tablet and Barnes & Noble’s Nook Tablet.

The so-called “phablet” was the object of derision among some critics who considered the device far too large to have any legitimate use as a smartphone. The Note also received its share of mockery for its Super Bowl ad that touted the device’s electronic pen as a game-changing innovation despite the fact that it reminded viewers of the Palm Pilot Stylus that was in vogue over a decade ago.

In addition to its large screen size, the Galaxy Note also features a dual-core 1.4GHz processor and is one of the devices slated to receive an upgrade to Android 4.0 (“Ice Cream Sandwich”) over the next few weeks. The device is available exclusively on AT&T in the United States and costs $299 with a two-year service agreement.