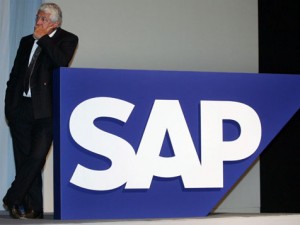 SAP could be close to announcing the general availability of its foray into the PaaS (platform-as-a-service) market, NetWeaver Cloud, which will go up against rival offerings from the likes of Oracle and Salesforce.com.

NetWeaver Cloud has been in beta for some time now and its release notes page on SAP’s website was updated Thursday, adding to a list of new features that in total suggest the platform is reaching a mature enough phase for a general release, perhaps at SAP’s upcoming Tech Ed conference. A company spokeswoman on Thursday declined to reveal whether this is the case.

The PaaS features an Eclipse-based SDK (software development kit) and currently supports Java. Other frameworks that can compile to Java can also be tapped by developers, and support for other runtimes is planned, according to a FAQ document.

The company’s goal is to build a marketplace and partner ecosystem over time around NetWeaver Cloud, much like Salesforce.com has done with its Force.com platform.

While there may not be massive evidence now of SAP customer demand for a PaaS such as this, one has a valuable role to play in their IT organisations, said Jon Reed, an independent analyst and consultant who closely tracks SAP.

There have been waves of SAP implementations over the years that ended up encumbered by large amounts of customisations, or “technical debt,” creating burdensome landscapes that are difficult to upgrade, Reed said.

With a viable PaaS to develop cloud-based extensions, whether by customers or partners, upgrades to core SAP systems could be made much easier, albeit not seamless, Reed said.

IT organisations could focus custom work on the most crucial of the systems and use the cloud PaaS for less mission-critical enhancements, he said: “The point is, you’d have these choices … instead of doing [customisations] at the drop of a hat, which is what a lot of SAP customers did.”

As SAP continues to build out its PaaS and cloud offerings, things could get even more interesting, Reed said. “What they’ve done is started to think about this as a service-based environment.” That means tying together SAP’s mobile platform, on-demand BI (business intelligence) and other services with NetWeaver Cloud, allowing developers to tap a broader range of capabilities for their applications from one place.

But SAP also faces the marketing challenge of telling a cohesive story with all these moving pieces, Reed said. “If you create a platform, to make it easy for customers, it’s got to make all kinds of sense to them.”

In addition, SAP will have to explain how the PaaS strategy works alongside its push into packaged SaaS (software-as-a-service) applications with moves like the acquisition of SuccessFactors.

“That’s what I’m looking to get at Tech Ed, a more coherent sense of what they’re doing,” Reed said.

SAP, like Oracle, is also coming a bit late to the PaaS party, according to another observer.

“The cloud-only providers have one great advantage: simplicity,” wrote Frank Scavo, principal analyst with Constellation Research, in a recent blog post. “Everything Salesforce.com builds is on its Force.com platform. Likewise, enterprise cloud leaders such as NetSuite and Workday grew up with single platforms. Their platforms are relatively easy to explain and easy to understand.”

“SAP, on the other hand, has a variety of on-premises and cloud systems,” he added. “Furthermore, it has built or acquired a variety of database products and mobility applications and platforms. The SAP cloud platform must now deal with all of these products.”

Scavo was recently briefed on NetWeaver Cloud by SAP over a two-day period, and it took a while for him to fully grasp the strategy, he said in an interview Thursday. “They do not have their story clearly messaged.”

While it shows promise on many fronts, NetWeaver Cloud is likely to be of interest primarily to existing SAP customers and partners, according to Scavo.

However, “long term, the big selling point for SAP is they’ve got tens of thousands of customers,” he added.

It’s conceivable, therefore, that NetWeaver Cloud could become attractive for developers who aren’t in the SAP world and want to develop entirely new applications on the platform, hoping to sell into that customer base, much like has happened with Force.com, Scavo said. “It looks like SAP has a complete vision for PaaS, and we’ll see if they execute on it.”