His Highness Sheikh Mohammed Bin Rashid Al Maktoum, Vice-President and Prime Minister of the UAE and Ruler of Dubai, has amassed over 2 million followers on the social networking site Twitter, making him the most followed leader in the Middle East Region. 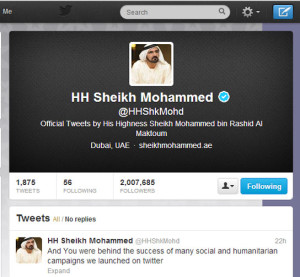 Upon crossing the 2 million mark, Sheikh Mohammed thanked his followers, praising them on their active participation in discussions and suggesting initiatives that have contributing to Dubai’s success.

My twitter page followers reached 2 millions today, thanks to your continuous support

Sheikh Mohammed promised his followers that his Twitter page will always be a platform for discussing topics, suggestions, and initiatives that will benefit the society.

To all our followers, you’ve been the core value by suggesting ideas, responding to initiatives and participating in many discussions

Sheikh Mohammed’s followers include people from the all over the world. He is currently the most popular online figure in the UAE, and he was also ranked as one of the world’s top 10 leaders on Twitter recently.

The success of the page can also be attributed to Sheikh Mohammed’s keenness to comment on current international and regional topics and issues. He makes regular announcements and posts important meeting pictures on the micro-blogging website.