The award recognises the most innovative and successful projects that are already being implemented or developed in any specific urban development area. Smart Dubai was awarded the accolade in recognition of its efforts with the Dubai blockchain strategy, which seeks to make the Dubai Government the first in the world to conduct 100% of its transactions via an online encrypted database by the year 2020. 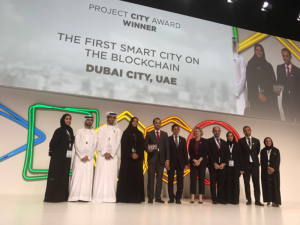 “We are honoured to have our efforts recognised here, at the premier Smart Cities Expo & World Congress,” said Her Excellency Dr Aisha Bint Butti Bin Bishr, Director-General of the Smart Dubai Office (SDO). “Smart Dubai’s solid vision to build a smart city centred around the happiness of its citizens commanded international attention at the Expo. Guided by the forward-thinking vision of His Highness Sheikh Mohammed bin Rashid Al Maktoum, Vice President and Prime Minister of the UAE, Ruler of Dubai, and the directives of H.H. Sheikh Hamdan bin Mohammed bin Rashid Al Maktoum, Crown Prince of Dubai and Chairman of the Dubai Executive Council, Smart Dubai has made great strides in our mission to make Dubai the smartest and happiest city in the world, with the support of our partners and affiliate organisations.”

“As an emerging technology, B=blockchain has enormous potential to both secure and expand digital wealth,” Dr Aisha explained. “And while around the world, cities continue to approach the technology reluctantly, we, in Dubai and the UAE, are embracing this opportunity with full force. We have already made significant progress to ready our city for the coming Blockchain era. The blockchain strategy will not only fully digitise government operations in Dubai – cutting cost by AED5.51 billion in the process – but will also create thousands of new tech and business opportunities.”

For his part, H.E. Wesam Lootah, CEO of the Smart Dubai Government Establishment (SDG), said: “Taking part in such a prestigious event centred around smart cities, which culminated in our winning this premier international award, is a great honour for Dubai and a testament to the emirate’s status as a world leader in embracing cutting-edge technology. We, at Smart Dubai, plan to go beyond simply applying Blockchain technology in our operations; in fact, we are currently working to outline the first set of international standards for Blockchain application in government. We are confident that our experience will inspire cities around the world and bring forth new opportunities to implement blockchain in all walks of life.”

H.E. Dr Aisha attended the Expo, taking part in a panel discussion on rethinking urban governance and making sure cities serve their population´s needs, focusing, in her speech, on Dubai’s Blockchain and IoT strategies.

Smart Dubai’s booth at the Expo also showcased the latest developments with the Dubai Pulse platform, which will open up the city’s data to innovators, entrepreneurs and statisticians, in addition to the developments in the Smart Decision-Making Platform and Dubai Now, the platform bringing together the most important smart services in Dubai. The booth witnessed a great turnout among fairgoers, most notably, it was visited by Ms Ada Colau, Mayor of Barcelona, and Ms Núria Marín Martínez, Mayor of L’Hospitalet de Llobregat.