More than 10,000 people attended the 2nd Global AI Summit, held under the theme “Artificial Intelligence for the Good of Humanity” and featuring 200 speakers from 90 countries. 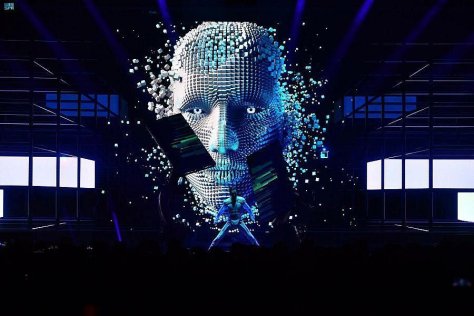 Under the patronage of His Royal Highness Prince Mohammed bin Salman bin Abdulaziz, Crown Prince and Chairman of Board of Directors of the Saudi Data and AI Authority (SDAIA), the three-day summit is held at the headquarters of the King Abdul Aziz International Conference Centre in Riyadh.

The patronage of His Royal Highness the Crown Prince highlights his keenness to benefit from this vital sector to realize the development of the Kingdom of Saudi Arabia and to make it a pioneering global model in building the knowledge economies to serve current and future generations and in realization of the Saudi Vision 2030.

The summit commenced with a live presentation dubbed “Humans can have a better future with the use of AI,” which included several scenes that tell the story of humans with AI, including the ethics of AI, the story of machine learning, how humans teach machines that become smart through understanding their instructions, in addition to how to become independent and operate without the need of human incomes until humans can accord with the machine again towards realizing harmony in the future. 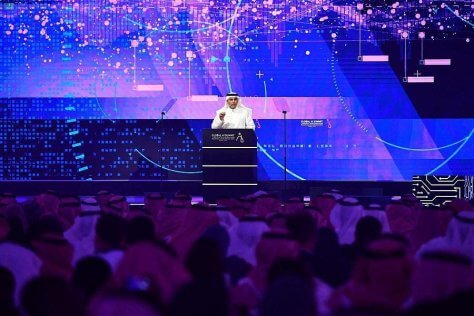 Minister of Communications and Information Technology Eng. Abdullah bin Amer Al-Swaha delivered a speech in the opening ceremony of the summit, during which he shed light on the support and empowerment of His Royal Highness the Crown Prince to all tools that can help seize future opportunities through focusing on AI and its role in serving humanity and drawing the future of the Kingdom of Saudi Arabia through building prosperous digital communities, smart cities and digital economies.

The minister referred to the results of the support and empowerment of His Royal Highness the Crown Prince, and their impacts on the community of entrepreneurs and companies in the Kingdom of Saudi Arabia, which resulted in adopting AI solutions that serve vital fields in the health, energy and digital economy sectors, going over some entrepreneur experiments of the Kingdom of Saudi Arabia, mainly Aramco’s adoption of AI solutions in digging and excavation that enabled the company to top energy companies in applying solutions that ensure environmental sustainability. 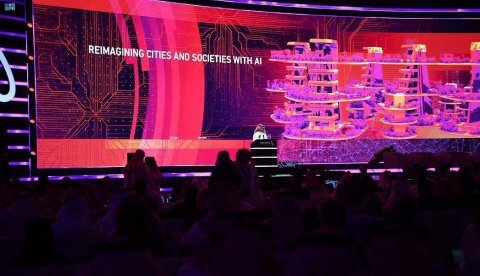 AL-Swaha also stressed the importance of The Line project, saying: “It is a gift from His Royal Highness Prince Mohammed bin Salman bin Abdulaziz, Crown Prince, Deputy Prime Minister and Minister of Defense, to humanity on how to plan smart cities over the 150 coming years and how the Kingdom of Saudi Arabia managed to adapt with AI solutions and data to build sustainable communities.”

SDAIA President Dr. Abdullah bin Sharaf Al-Ghamdi also delivered a speech starting with welcoming guests in Riyadh, the home of AI, referring to the first edition of the summit that was held between the virtual and real worlds in 2020 due to the COVID-19 pandemic, saying that the time between then and now the summit was not just a transition from one version to another, especially that this period was a defining moment in the history of mankind that went through a lot of challenges and lessons over the past two years.

Al-Ghamdi pointed out that technology has developed, mainly those related to AI, in a remarkable way and has become an integral part of every aspect of our lives, noting that the world, in previous centuries, spent 200 years to discover the first vaccine of smallpox before the disease is controlled, while this period was reduced to a few months since the spread of the first variant of the COVID-19 thanks to technologies of AI.

He noted that this was not the only change, especially that AI and virtual assistance in millions of houses, smart phones and autonomous vehicles are no longer dreams anymore, where AI and robots have conducted millions of surgeries in the present.

Al-Ghamdi also noted that AI is present today, saying: We are about to reach the inherent capabilities of AI, where early signs are very promising, where vertical farms that work today through AI tools can produce food with a production capacity of more than 400 folds of what conventional farms can produce, where AI has proven its ability to reduce carbon emission by 40% and that it can predict some cancer types in a better way than humans.

The SDAIA president said that the most important subjects include: exploring the relation between humans and machines: where to stop? Where shall machines start? He noted that three years ago we started seeking answers to these questions through launching the AI Artathon that represented a global experience that gathered hundreds of AI experts and artists to explore the closest aspects to mankind: creativity.

He also warned against the digital gap between countries in light of the technological development, especially that such gaps are found within the same nation, noting that the gap between the two genders, according to a recent study, is huge, where only 12% of AI researchers are women.

Such divisions always take us back to the main and most urgent question: What is considered a responsible AI? If AI today was developed in certain geographical locations and was controlled by a certain race and targeted certain markets, how can we trust it? So, we welcome the recent UNESCO agreement that included recommendations regarding AI ethics and was endorsed by 193 countries, and we believe that all nations bear the responsibility of implanting these recommendations to enhance the credibility of AI.

Al-Ghamdi also called for participating in developing AI within joint efforts and to share our best practices, expertise, resources and challenges to guarantee that all are included, expressing aspiration to announce several pioneering initiatives with our global partners to honor the pledge that this summit has adopted ““Artificial Intelligence for the Good of Humanity”.

Saudi Aramco CEO and President Eng. Amin Al-Nasser said that the company is proud of being one of the main sponsors of the summit, during which it announced a new strategic project dubbed “Global AI Corridor”.
He said that this ambitious project is in its first steps and its design includes several aspects to play four main roles: Establishing an excellence center to develop AI solutions for Saudi Aramco and interested institutions in the Kingdom of Saudi Arabia in this technology with immense aspects; enhancing efforts to develop the high-influence intellectual property system connected to AI; and marketing intellectual property products commercially.

He added that this project also seeks to train young Saudi efficiencies and develop them in AI fields, and support a new generation of entrepreneur Saudi startups that rely on AI in their activities, noting that the scheme was called a global path to help efforts in transferring knowledge, exchanging ideas and offering solutions between the Kingdom of Saudi Arabia and the rest of the world.

AL-Nasser referred to three themes of the summit: AI Now, AI Next and AI Never, and will be discussing the impact of AI on some important issues, such as economic mobility, healthcare, developing human resources and smart cities, noting that the summit includes goals to establish a modern global platform that brings together leaders and entrepreneurs of AI from across the world.

The opening ceremony and the main session were attended by several heads of government authorities, a slew of CEOs of major technological companies in the world, AI specialists from local and international research centers, and interested people in ICT.

The summit will also include several initiatives and signing ceremonies of agreements and memorandums of understanding for Saudi and international companies that are envisioned to contribute to developing the use and influence of AI over the few coming years to serve humanity.
NEOM is one of the most important projects within the Saudi Vision 2030 that invest in AI to help serve humanity and utilize it in building cognitive smart cities through offering a unique global model that realizes sustainability and perfect living in harmony with the nature depending on advanced digital technologies.