The UAE Space Agency, in partnership with Khalifa University of Science and Technology and the American University of Ras Al Khaimah (Aurak) has reviewed the preliminary design of the MeznSat 3U CubeSat. 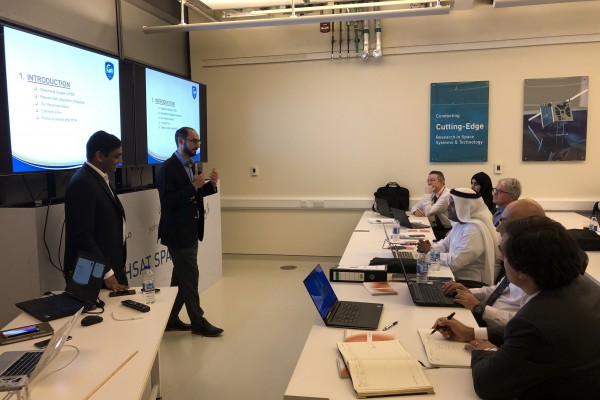 The satellite is aimed at monitoring and studying the Earth’s atmosphere.

The Preliminary Design Review (PDR) was held during a meeting at Masdar Institute, and chaired by Khaled Al Hashmi, director of Space Mission Management at the UAE Space Agency, according to WAM.

MeznSat is to be launched in late 2019 from a site in Japan, in coordination with the Japan Aerospace Exploration Agency (JAXA).

Once in orbit, the satellite will use a visible camera as well as a shortwave infrared spectrometer to measure the abundance and distribution of methane and carbon dioxide in the atmosphere. A team of students will monitor, process, and analyze the data sent from the satellite at a ground station in the UAE.

The satellite will also provide valuable insight into the concentration of nutrients in the coastal waters of the Arabian Gulf, which will allow for more accurate predictions of algal blooms and support the timely implementation of relevant precautionary measures.

Al Hashmi said, “The MeznSat project is an important addition to the UAE’s satellite capabilities, which include remote sensing, Earth observation and communications. The project’s objective is primarily educational, falling within the Agency’s mission to develop national capabilities, strengthen scientific research and organize the sector.

“It is an amazing opportunity for students to demonstrate their skills, put their academic knowledge into practice and gain invaluable hands-on experience. MeznSat is also considered an important achievement for the national space sector in regards to the development and manufacture of satellites.”