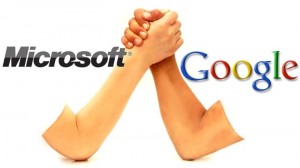 The long-running war between Google and Microsoft may never have a winner, an analyst said on Wednesday, but it definitely has a loser: customers.

“These are business decisions, but unfortunately, consumers and very small businesses get squeezed in the middle,” said Patrick Moorhead, principal analyst at Moor Insights & Strategy, of the recent battles between the two giants.

Broadly speaking, Moorhead was referring to the skirmishes that have entangled everything from search and office productivity applications to browsers and operating systems. Specifically, he was venting his frustration at Google for disrupting the synchronisation of its business software with Microsoft’s ecosystem.

Like others, Moorhead, who uses both Google Apps for Business and Microsoft’s Office 2013, found that he wasn’t able to synchronise his Google calendar with Outlook 2013 after Google recently debuted a new sync tool.

In a message on a Google support forum, a company representative said only that, “Our engineers are aware of the issue and are currently investigating.”

Moorhead saw the blooper as symbolic of the disruption caused by bickering. “It’s users who are caught in the cross-fire between Microsoft and Google, and when they do, it wastes a lot of time and money, and causes a lot of consternation,” he wrote in a blog post.

The result of such spats? Customers start looking for alternatives, an outcome that does neither vendor good. “Ultimately, [disagreements between companies] have to arrive at a good conclusion, or customers take matters into their own hands,” Moorhead said in a Tuesday interview.

Moorhead’s suggested solution for customers in similar straits was to switch to a Mac.

“Macs work great with Google services, supporting IMAP for mail, CalDAV for calendar, and CardDAV for contacts and tasks,” said Moorhead of the OS X native applications. “By messing with users to play big company games, Microsoft and Google risk alienating their users and driving them into the arms of Apple, at least in this situation,” he wrote on his blog.

Moorhead acknowledged that in most cases, some kind of truce is called before too much damage is done to either, or to customers. But that’s not guaranteed.

By aggravating its business customers, for example, whether with a flawed sync tool or by phasing out synchronisation using Exchange ActiveSync (EAS) – the latter move triggered a counter-attack by Microsoft – Google has showed its immaturity in dealing with the corporate market, Moorhead contended.

Nor did Microsoft escape unscathed. “Microsoft must ultimately find a way to connect [its software and services with Google’s],” said Moorhead. “I just cannot foresee a day when they don’t do that.”

Both must realise that the continued squabbling, and the steps each take in retribution for past slights, do customers a disservice, he said.

At his company’s I/O developer conference earlier this month, Page attacked what he called “people milking off one company for their own benefit,” referring to Microsoft’s integrating Google Chat into its Outlook.com email service while at the same time blocking efforts by others to tie into Skype. “We certainly struggle with people like Microsoft,” Page said.

Page also argued that competition was not a “zero-sum” game, where if one technology company won, another automatically lost, and called for more interoperability and the use of open standards.

If Google puts its money where Page’s mouth went, that would be fine by Moorhead. “I do think calmer minds will prevail,” Moorhead said, perhaps optimistically, of the rivals coming to their senses. “Not even Google has the power to shut out all Office users using Google [services].”