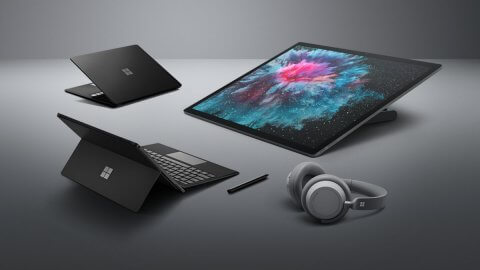 Microsoft has opened pre-orders for its latest Surface Laptop 2 and Pro 6 devices but you can only place the orders if you shipping address is within the United States. Customers in the UAE and the rest of the Middle East should wait for the regional launch.

Surface Pro 6 introduces the latest 8th generation Intel Quad Core processor, which the Microsoft says is more than 67 percent faster than 5th generation Surface Pro. The device features PixelSense Touch Display. The Pro 6 weighs about 1.7 pounds (0.77grams) with a 12.3-inch display and up to 16GB of RAM inside. In terms of battery life, Microsoft says it can last all day (13.5 hours) of video playback. Microsoft has also added two new colour variants –  Platinum  and Black matte.

The Surface Laptop 2 comes with the new Quad Core 8th generation Intel processor and again the company claims it is 85 percent faster than the original Surface Laptop and offers 14.5 hours of battery life.

However, it does not ship to the UAE or the rest of the region. Microsoft usually ships its latest products into the UAE after a three month wait period. So expect a UAE rollout anytime before the end of the year.