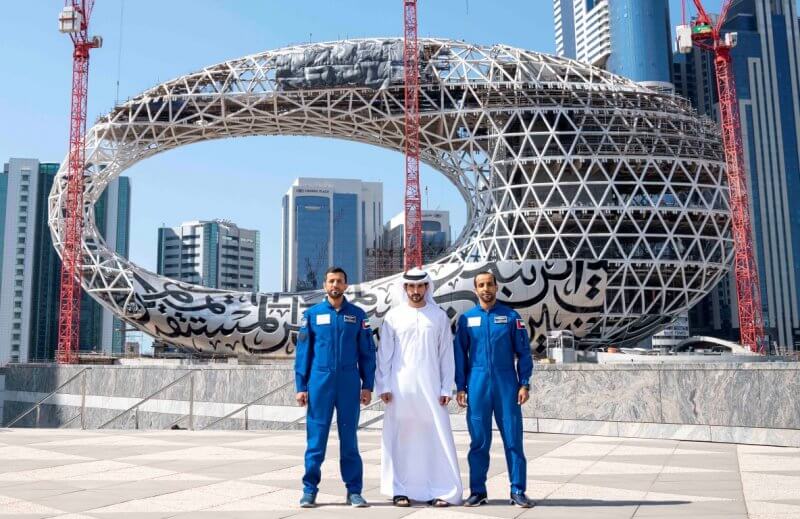 The two astronauts were selected among 4,022 applicants for the Mohammed bin Rashid Space Centre’s UAE Astronaut Programme, which was launched in 2017 by Vice President and Prime Minister of the UAE and Ruler of Dubai Sheikh Mohammed bin Rashid Al Maktoum and Crown Prince of Abu Dhabi and Deputy Supreme Commander of the UAE Armed Forces Sheikh Mohamed bin Zayed Al Nahyan, to participate in global space exploration missions by 2021.

During the meeting, Sheikh Hamdan highlighted the importance of the mission that the two astronauts are tasked with, as they are the first two UAE citizens to travel to the International Space Station.

He also wished them success in all the projects they will be involved in noting that they will represent an important step for a very ambitious project that the UAE aims to lead.

Sheikh Hamdan also reviewed the various steps of UAE Astronaut Programme, and the training they undergone at the Yuri Gagarin Cosmonaut Training Center in Russia.

The UAE Astronaut Programme is considered one of most inspiring programmes that meets the aspirations of youth with distinguished capabilities in terms of scientific standards and personal skills.

The programme has also become one of the most important projects of the National Space Programme.

It was launched in April 2017 with the aim of establishing an infrastructure for the UAE space industry.

Al Mansouri is a military fighter pilot with 14 years of military aviation experience. In 2016, he qualified to be an aeronautical pilot and now pilots an F-16B60 aircraft.

Al Neyadi has a PhD in Data Leakage Prevention Technology from Griffith University in Australia, as well as a Master’s degree in Information and Networks Security from the same university.

He also has a Bachelor’s degree in Electronics and Communication Engineering from Brighton University in the UK.