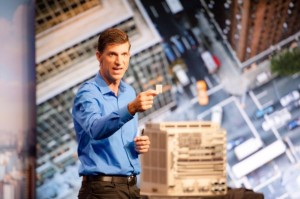 Cisco is in the hefty transition between networking giant and total IT company. At Cisco Live! 2013 in Florida, it claimed the vehicle to get it there will be a new business group and partner ecosystem revolved around the ‘Internet of Everything’. Ben Rossi reports.

You can’t fault Cisco’s ambition, and you can’t blame them either.

In an era when many IT companies are floundering, Cisco is bucking the trend. The networking giant has been growing at juggernaut speed in recent years, and shows no signs of stopping.

The reason for such growth? Well, one thing is Metcalfe’s law, which the folk at Cisco just love to quote. And why wouldn’t they — Metcalfe’s law states that the value of a network is proportional to the number of connected users of the system.

Another reason is that, whilst it would be easy to stick with its cushy networking market, Cisco is hell-bent on world domination. It has already impressed the IT world with its transformation into a top IT solutions provider by growing businesses in cloud computing, collaboration, video and security, as well as building up its software capabilities.

The next step is to develop into a total IT company, and Cisco believes what will get it there is a focus on the ‘Internet of Everything’ (IoE).

At Cisco Live!, the company revealed a major product refresh for its enterprise network portfolio, which it said brings applications and network services software, and hardware networking functions, together to enable its new Enterprise Network Architecture.

This Enterprise Network Architecture, Cisco said, positions its enormous routing and switching franchise, and much of the company’s customer base, for the future of networking, which it believes will evolve around IoE.

Research released by Cisco ahead of Cisco Live! revealed that IoE is expected to enable enterprises to generate at least $613 billion in global profits in 2013, and represents at least a $14.4 trillion market over the next decade.

IoE is the networked connection of people, process, data and things, and the increased value that occurs as “everything” joins the network. Several technology transitions — including ‘the Internet of Things’ (IoT), increased mobility, the emergence of cloud computing, and the growing importance of big data, among others — are combining to enable IoE.

And Cisco is not just talking about it. It revealed at Cisco Live! it has formed a business group to specifically address the IoT opportunity, funded with $200 million in R&D resources, hundreds of people in development and 500 people in sales and marketing.

The group is led by Rob Soderbery, Senior VP and GM of Cisco’s Enterprise Networking Group, and Wim Elfrink, Executive VP, Industry Solutions and Chief Globalisation Officer, whose current duties do not change.

“This is a today business,” Soderbery confirmed. “This is already a multi-hundred million dollar business for us.”

Such a business requires an ecosystem of partners, a task which Cisco embarked upon around six months ago, Elfrink explains.

“I think the first big ones were Rockwell Automation and Honeywell,” Elfrink says. “Then Schneider came on board, and Johnson Controls, Johnson & Johnson, and Phillips are all part of the ecosystem now.

“Initially, when we started IoE, which was only six months ago, we started to plan what we called a World Forum for IoT. We have had a steering committee and selected in every vertical what we thought were the most important partners — healthcare, smart cities, discrete manufacturing, physical safety and security, etcetera.”

The first IoT World Forum will take place in October in Barcelona, and will be attended by around 1,000 partners. Cisco hopes to repeat this event in a different city every year, eventually growing it to a level that could match the scope of events like Mobile World Congress, according to Elfrink.

“It’s growing fast,” he says. “I see IoT and what it enables as an entire new industry, and if you want to create a new industry, you need five things; thought leadership, global open standards, smart regulation, public-private partnerships, and new world ecosystems.

“The last one is the whole initiative we’re taking in Barcelona now, and then next year somewhere else, to start building a new ecosystem.”