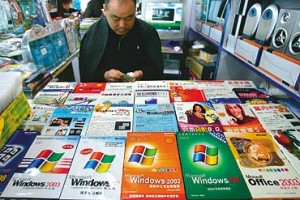 The detectives at IDC have been at it again, this time with the compliments of Microsoft, which commissioned a study into pirated and counterfeit software. Findings suggest that pirated software is costing the industry in excess of $114 billion – shocking, right? Joe Lipscombe and Tom Paye go deeper.

On the day the IDC figures were released, Microsoft announced its ‘Play It Safe’ campaign, an initiative aimed at raising awareness for businesses. The main thrust of this campaign, however, was that pirated software opened up businesses to malware-related risks.

What we wonder is whether or not Microsoft was using the threat of malware to encourage a sales boost. And if so, are there better ways to portray the strain that pirated software is putting on the industry?

The tech giant has good reason to show concern for sales. The pirate market is fairly excessive in the Middle East, and, make no mistake, pirate markets are in strict competition with distributors.

Business Software Alliance (BSA) statistics showed that some countries in the Middle East and Africa had a pirate software market percentage among the highest in the world, although the UAE was encouragingly low.

Pirated or counterfeit software makes up 86 percent of Iraq’s market, whilst the UAE records only 37 percent of pirated downloads. But compare that to the United Kingdom (26 percent) and the USA (19 percent), and the numbers still leave a lot to be desired.

The worldwide average for pirated of counterfeit software stands at 42 percent, however the Middle East and Africa is an alarming 58 percent. Western Europe was recorded at 32 percent and North America as 19 percent.

“It’s a huge problem for the channel as well, because every time someone goes to the Web to purchase cheap counterfeit software, that’s business being taken away from loyal, honest channel resellers and partners.”

Had Microsoft simply stuck with that message, it would certainly have resonated with the channel, and probably made an impact on end-users, too. Indeed, Microsoft could have come up with data that showed how much it costs for the research and development of its products, stating that the loss of business, ultimately, means less money for investment, and fewer innovations.

But instead, the vendor went with its ‘Play It Safe’ campaign, which was released in tandem with the IDC survey titled ‘The Dangerous World of Counterfeit and Pirated Software.’

It’s no secret that many consumers and businesses purchase and download pirated software purposely as a way of saving money, and the survey revealed that 33 percent of the software downloaded by businesses came already infected with viruses such as malware and botnets.

One in three pieces of consumer software was also found to be infected at the time of download and Microsoft says that businesses will spend 1.5 billion hours and $22 billion discovering and repairing infected software in 2013.

Over 2,000 consumers and 250 CIOs in 10 countries were surveyed, as well as websites and peer-to-peer networks being analysed for dangerous software. Coutro says that 45 percent of pirated software is now downloaded from the internet, 78 percent of which was already infected with viruses.

But the problem seems to be a few layers deeper than this. For example, Yemen recorded an 89 percent market volume of counterfeit software – not a percentage that can be acquired overnight.

So, if 45 percent of Yemen’s 89 percent pirated software market is downloaded from the internet, 78 percent of which is infected with harmful viruses, that equates to around 31 percent of the country being infected.

“What we’re seeing is a new kind of organised crime, one less risky than arms dealing or drug selling – people taking advantage of high quality counterfeit and selling it at discounted prices on peer-to-peer networks or websites,” says Coutro.

“These organised crime units are infecting these pieces of software, selling them at a discounted price and then using methods such as key scanning. The second a business or consumer logs into any sensitive site, such as banking or other, the passwords are all read and the perpetrator has full control of the machine.”

Coutro said that the market is in a “horrific position” when it comes to dealing with pirated software. Many pieces of software now are extremely high quality and it would take detailed analysis just to recognise if it was counterfeit.

“We work on three fronts to address this; we educate and raise awareness, we engineer our software with unique keys and components which make piracy more difficult, and we also work with local entities to offer expertise for governance and protection,” he said.

As IDC’s numbers suggest, though, Microsoft faces an uphill battle in fixing the problem. What’s interesting is the way that the vendor dressed the report up as looking out for its customers. Perhaps Microsoft really does have its users’ interests at heart, and no doubt there are security risks when it comes to using pirated software. But surely the point should be more pertinent than that.

Pirated software is costing the industry billions every year, and unless something is done to properly tackle it, the companies that create, distribute or resell software are going to lose out. What pirate software users need to realise is that, if this state of affairs continues, there will be nothing decent left to pirate in the first place.

And while Microsoft says that it is playing an awareness campaign on the back of these numbers, it is not beyond reasonable doubt that the firm anticipates to see a little sales push from them, too.