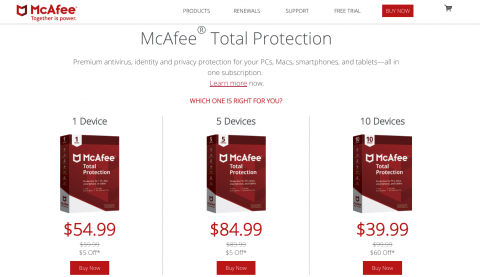 Cybersecurity firm McAfee says it is working on a new reseller website to educate and sell its products in the region.

This the company said will enable users to adopt digital purchase of its products. Alexander Salvador, director, EMEA Retail Consumer Sales at McAfee, says there is a growing demand for digital retail sales in the UAE.

“What we have seen over the past few years is a focus on physical products and we have been focusing on consumer retailers. Of late, we have seen online retailers like Souq.com entering the market place,” he says adding that, sales in the region currently is concentrated more through brick and mortar stores.

The annual sales from the region he says is about US$20 million. “Currently only 5 per cent of the regional sales is purely digital. Its 100 per cent in some parts of Europe like Italy. UAE is one of the markets in the region where retailers have a high interest to switch to digital,” he says.

The new portal will be first launched in English in 2019 and will soon be followed by an Arabic language portal.

“This will be one of our new projects for 2019. The portal will also be a tool to educate consumers about what`s available and to make them understand their world of protection

Amidst increasing threat landscape McAfee says the device pattern on which the antivirus software is being installed is also changing. “About 90 per cent of our installations are on Windows devices. But we are witnessing increasing number of mobile devices coming on board,” he said adding that McAfee is gearing up to a mobile first adoption strategy as more and more consumers are using smartphones for most transactions.

About 50 to 60 per cent of the threats are still traditional malware followed by cyber crime at about 20 per cent. Bitcoin mining he says is fast growing in the region.

According to the recent McAfee Labs Threat Report, cryptocurrency mining malware increased by 86 per cent in Q2 2018.

This trend continued in Q2 as total samples grew by 86% with more than 2.5 million new samples. McAfee Labs has even identified what appear to be older malware such as ransomware newly retooled with mining capabilities, the report said adding that crypto mining malware although primarily targets PCs, other devices such as Android phones have also become victims.

With the emergence of threats targeting mobile devices, peoples concerns have also shifted, says Salvador. “People are more concerned about identity and privacy on their mobile devices,” he said adding that McAfee`s solutions are capable enough to handle the growing threat landscape and is protecting about 51 million transactions a day, a growth of about 10 to 15 per cent annually.