2CRSi has announced that it has been chosen by Airbus to provide very high-performance calculation servers that will be used by a European anti-crime agency. 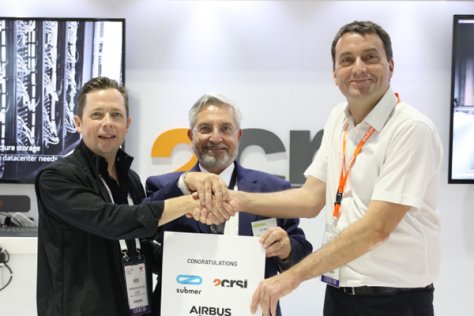 This commercial success relates to the rollout of OCtoPus 1.8B servers for a total 3,744 CPU Intel Xeon cores and more than 7.45 million NVIDIA CUDA cores. These OCP (Open Compute Project) servers have been specially designed to function in immersion cooling tanks developed by Submer Technologies.

The range of OCtoPus servers, launched by 2CRSi in 2017, provides a tangible response to the energy requirements of datacenters in order to meet their ecological challenges. OCtoPus servers have provided a 23% reduction in the energy consumption compared to equivalent servers fitted with traditional cooling systems.

Under this Airbus project, the combination of 2CRSi servers and Submer Technologies cooling systems offers an even greater reduction in energy consumption through the elimination of air-conditioning: the servers are immersed in a dielectric cooling liquid which is itself cooled through a water circuit.

2CRISi and Submer Technologies have succeeded in making the difference as a result of the unique technical features of their submerges servers. Other decisive factors that were considered in selecting the servers included the simplification and speed of the installation and fitting-out of the datacenter – 3 months are sufficient to install the datacenter compared to 1½ to 2 years for a traditional datacenter.

Moreover, long-term cost control was crucial for the future renewal of equipment: it will be possible to replace computer components (CPU and GPU cards, memory, etc.), where technological development, is very rapid. Feed and cooling modules will be retained.

In addition to the relatively limited investment budget, the operating costs related to the servers installed will be reduced by more than 60% – an achievement that is both economic and ecological.

“We are proud to have been chosen by an international security player whose requirements in terms of performance and reliability are clear. Once again, we have succeeded in making the difference through our innovative and competitive solutions. I would like to congratulate our teams who are at the heart of this new success, which further strengthens our commercial visibility internationally.” said Alain Wilmouth, Founder, Chairman and CEO.