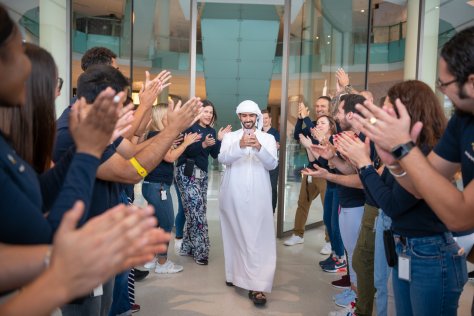 Finally, Apple’s latest series of iPhones – the iPhone XS Max and the iPhone XS along with the Apple Watch Series 4 arrived early yesterday (September 21) morning into stores across the UAE.

A quick look at what was being purchased during the first few hours indicated an appetite for the new larger screen iPhone XS Max. Surprisingly, there were not many takers for the Series 4 Apple Watch.

Vladislav Mikheev from Russia,  one of the first to queue up said, he bought six devices in total and all of them are iPhone XS Max. “Five are 512 GB versions and one of it is 256 GB,” he said. Mikheev and his friend said they had arrived at around 11am on Thursday to the Dubai Mall.

Many others who were in line also indicated their preference for the larger sized iPhone. The trend is similar to what is being witnessed in other parts of the globe. The demand for iPhone XS Max is surpassing the demand that was witnessed when the iPhone X launched last year.

According to Gene Munster, Will Thompson of Loup ventures  said “Customers are more interested in the Xs Max this year than they have been interested in Plus-sized phones in the past,” they said in a note.

However, in the long run they are predicting a surge in sales for the budget friendly iPhone XR, which will start retiling on October 23. “We expect iPhone Xr, to account for 38 per cent of iPhones sold in the next year, compared to 21 per cent for the Xs (9 per cent) and Xs Max (12 per cent) combined,” they said in a note.

“It is an S year – the upgrade part of the Apple’s typical device cycle. Demand honestly has been solid for the XS max at this point. The new screen size is driving people to look at it,” says UAE based tech enthusiast Omar Kasim. 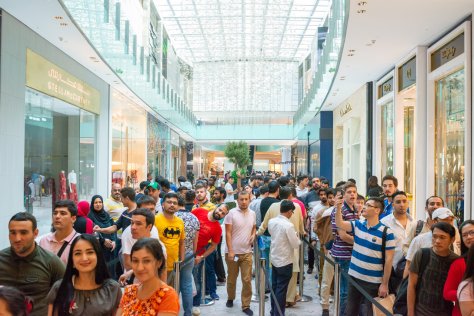 Meanwhile, an estimate by Rosenblatt Securities analyst Jun Zhang said preorders for the iPhone XS and iPhone XS Max would be “weaker compared to iPhone X preorders” a year earlier.

He expects Apple to produce 35 million to 36 million of the two devices in the September and December quarters combined, compared to 36 million iPhone X models produced a year ago.

For those still planning to buy, expect a delay of one to two weeks, if you are ordering  online. AS per the latest schedule, Apple store in the UAE states customers can expect delivery between Oct 2 to 8 for the iPhones.

“The Apple watch especially has been sold out for the next few weeks,” adds Omar. Currently, the Apple store in the UAE is giving an estimated delivery date of October 16 to 23 for the latest orders.

Meanwhile, the queue in front of Apple store in Dubai were shorter this year. About a hundred people had lined up in a queue that had started building up from late Thursday evening.

Bakhit Alsubousi from Abu Dhabi was the first customer from the pre-ordered category to walk into the store. “I was second last year. This year, I am all excited,” he said.