Oppo which launched its Find X smartphone in the UAE yesterday, also announced the Lamborghini edition of the flagship device that went on sale across premium outlets.

While the Oppo Find X is priced at AED3999, which in itself is on a higher side compared to other markets,  (https://www.tahawultech.com/industry/technology/oppo-launches-find-x-in-uae/)

the Lamborghini edition is priced at AED6999. 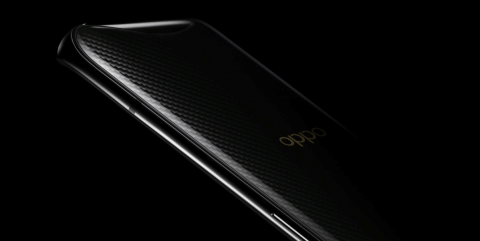 The luxury edition, co-branded with the super fast carmaker, boasts of one of the most important technology features that comes handy in emergency situations – the Super VOOC charger.

If you thought a Lamborghini was fast enough to beat all other cars in its league, the Super VOOC technology enables the user to fully recharge the smartphone is just 35 minutes.

The Super VOOC technology based on low voltage pulse algorithm works on a customised battery by Oppo and was first announced during the Mobile World Congress in 2006. In 5 minutes the technology gives enough charge for the phone to be used for the next two hours.

The Oppo Find X is powered by a 3400mAh battery and reduces the average charging time of a similar battery by half.  Several flagship models by Huawei, Samsung and LG can be fully charged in a little more than an hour.

And then you have the exquisite carbon fibre back, engraved with the Lamborghini logo.

Well, if for nothing else, you pay the premium for the co-branding, and a genuine Lamborghini association is not just for the ordinary.

That’s exactly what Andy Shi – Managing Director of OPPO Middle East and Africa said during the launch event in Dubai. When asked to elaborate on the more than 90 per cent premium being charged on the Lamborghini version, he said, “This is a special one for those who aspire the brand value. And we built the phone with special features to make it worth the money,” he said.

This is not the first time customers have been paying a premium for luxury co-brands. Remember the Nokia Vertu and Blackberry Porsche devices.

However, minus the design, storage and Super Vook technology, the remaining elements of the device is just the same as Oppo Find X. It comes with Snapdragon 845, 25MP front camera and a 6.4 inch screen.

“We are confident that the special edition will find enough traction here where people value luxury,” said Shi.

The Chinese smartphone maker is aiming to catapult the brand identity of Oppo within the region. “We want to be among the top three smartphone brands. We have already achieved that in China. We want to now do the same here. And we are confident that our latest devices will help us achieve the milestone,” he adds.