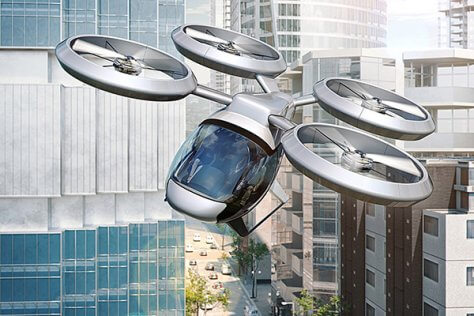 Flying over any traffic and in-between high-rise buildings is likely to be possible in a few years. Once the infrastructure is sufficiently in place, passengers can potentially travel in flying taxis at prices comparable to those of normal taxi cabs. I say taxis because it is less likely that private flying cars will establish themselves in the near future as the the trend in the automotive industry and the urban aircraft development sector is heading in the direction of shared mobility. Flying taxis are more easily achievable than autonomous car networks due to not being limited by road infrastructure.

But the question is how can technology providers ensure that a reliable air taxi system is available at a low price? A sensor solution in aviation currently costs tens of thousands of euros, which handed down naturally makes the costs for journeys more expensive. At Bosch, we are investing in microelectronics to ensure that air taxi flights will be affordable for everyday use.

For flying taxis to be airborne in cities, they have to be as quiet as possible, be powered by electric engines, and they will also have to be light. Conventional aerospace technology is too expensive, bulky, and heavy to be used in autonomous flying taxis. That is why we have combined dozens of sensors to create a universal control unit. The universal control unit combines dozens of micro-electromechanical systems (MEMS) in a small space so air taxis can be located and safely controlled at any time. In addition to acceleration sensors that measure the movements of the aircraft, built-in yaw-rate sensors detect its angle of attack and magnetic field sensors gauge its compass heading. Pressure sensors determine the altitude via the barometric pressure and the current speed via the dynamic pressure. The built-in MEMS have already proven themselves in the automotive industries. In a few years’ time, they could be a part of the standard equipment used in flying taxis.

Collaboration will remain key to achieving the best outcomes. To support further power efficiency, the OCEAN12 project aims to ensure that new sensor systems for future mobility concepts consume up to 90 percent less power than today’s systems. OCEAN12 is a pan-European collaboration of 27 partners from the fields of semiconductor technology, electronics, aerospace technology, and automotive technology is working together up until the end of 2021 to develop various especially energy-efficient components that can collect and process data from the surroundings of vehicles and aircraft. These components include surround sensors such as cameras and lidar or radar sensors, as well as microprocessors for processing data. The electronics translate the collected data into commands for downstream components – for example, braking or steering a car or controlling the propulsion of a flying taxi.

Development in the OCEAN12 project is based primarily on ‘Fully Depleted Silicon on Insulator’ technology. This method of semiconductor production involves adding an ultrathin layer of insulator to reduce what are called leakage currents, resulting in lower energy consumption and higher computing speed. The new technology makes it possible to build particularly small sensor systems, as sensors containing high-performance evaluation circuits can be integrated as a system on a chip. Based on this technology, the research alliance partners can continue to develop components that offer an optimum combination of maximum energy efficiency with advanced computing power.

The development of flying taxis has only been made possible by the technological advances made in the past ten years, but more needs to be done to ensure mass adoption- through improved battery and sensor technology, power electronics and increasing processing power. Currently ranges beyond 200km makes batteries less efficient. Research indicates that at present the best batteries provide around 250 W-h/kg but could rise up to 800 W-h/kg by the middle of this century, increasing their feasible range to 700 miles. For further cost optimisation, greater innovation in battery technology can even incorporate autonomous flights in long-haul air travel providing continued opportunities.