Today, humans are being melded with technology that didn’t exist even a decade ago. Enhanced dexterity, increased strength, and heightened senses are not science-fiction — they are here.

Currently, cyborg tech is most useful as support for people who live with a disability. Cyborg tech can replace missing limbs, damaged organs, and limited senses. 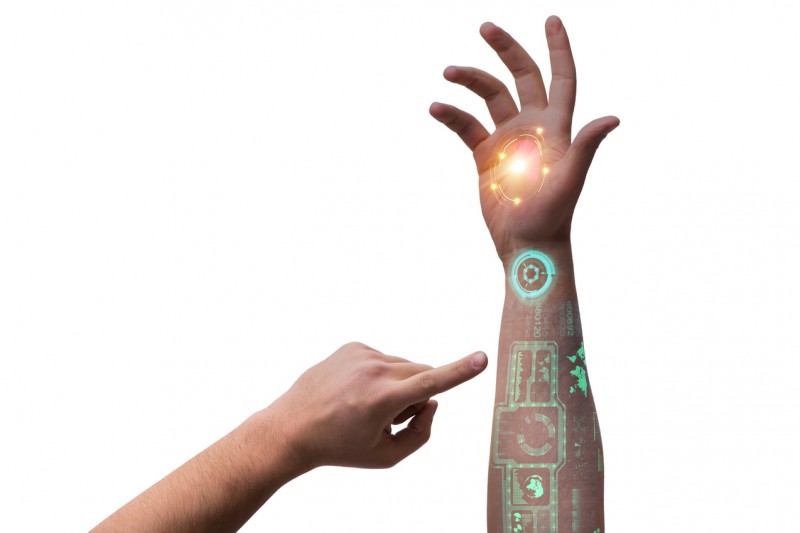 Here are six examples of the present day cyborg in action.

As noted earlier, activist and artist Neil Harbisson was born without the ability to see color. In 2004, he mounted an electronic antenna to the lower back of his skull that modulates frequencies of light into vibrations his brain recognizes as sound, allowing him to “hear color,” including infrared and ultraviolet.

“There is no difference between the software and my brain, or my antenna and any other body part. Being united to cybernetics makes me feel that I am technology,” he said in a National Geographic interview.

The LUKE Arm (named after Star Wars character Luke Skywalker) is a prosthetic that goes beyond everyday functionality and helps the wearer regain the sense of touch. It also contains all the basic functions of an arm and hand. Electronic sensors extrapolate signals from the wearer’s muscles and translates them into physical movement. The arm was made available to military amputees in 2016.

In 2002, at the age of 37, Jans Naumann, who was blinded in his 20s, participated in a clinical trial at the Lisbon-based Dobelle Institute. A television camera was connected to his brain, circumventing his damaged eyes.

The system allowed Naumann to see Christmas lights at his home that year. Tragically, the system failed two weeks later. Upon William Dobelle’s passing (the inventor of the technology), no notes or documents were found so there were no instructions to repair Naumann’s system.

Getting A Leg Up

In 2012, years after his leg was amputated above the knee in 2009, Zac Vawter became the first recipient of the mind-controlled bionic leg. The technology translates brain signals into movement. Prior to Vawter’s bionic leg, the software that translates the brain signals was only used in upper limbs.

Give Us A Hand

Prosthetics tech giant Bebionic has created some of the most intricate prosthetic hand designs as of 2017. Every joint along every digit is independently controlled by dedicated motors. The bebionic hand has fourteen pre-programmed grip patterns. The highly sensitive motors fluctuate the force and speed of the grip— it can gently hold an egg, or easily manage 99 pounds of weight.

The Eye Has It

Rob Spence, a filmmaker, decided to replace his missing right eye with a prosthetic, wirelessly-transmitting video camera. Spence worked with RF Wireless Design to create a prosthetic eye shell that could hold the necessary electronics in such a small space. His cyborg eye camera can record up to 30 minutes of footage before depleting the battery.

There are still more cybernetic options available today. Neurobridge is designed to reconnect brain and body, and has actually enabled paraplegics to move again. It’s likely the most advanced linking of man and machine so far achieved.

These enhancements are coming quickly, but quietly. Artificial retinas restore sight to the blind, and cochlear implants offer hearing to the deaf. Deep-brain implants, also called “brain pacemakers”, assuage the symptoms of 30,000 Parkinson’s sufferers around the globe.

Innovators are continuing to take things further, with replacement organs, robotic prosthetics, and implants used to alter or enhance bodily functions. “This is the frontline of the Human Enhancement Revolution,” wrote the technology author and philosopher Patrick Lin last year. “We now know enough about biology, neuroscience, computing, robotics, and materials to hack the human body.”

This technology can improve, augment, or replace every part of the human body, from vital organs to amputated limbs. A remake of the movie RoboCop, released in 2014, showed a distant future where technology and humans become one – but many experts say the age of the cyborg is already upon us.

From smart contact lenses used to improve vision to military exoskeletons that give wearers superhuman strength, cyborgs are a part of our immediate future. Google is currently developing smart contact lenses to monitor glucose levels of diabetics – and other developers are experimenting with smart lenses that could enhance vision capabilities.

Many innovators claim we will soon be able to send information directly into our vision nerves, using technology designed to help the blind see. We also already have basic exoskeletons that allow the elderly and disabled to walk.