LG Display has developed a 5.5-inch screen for next generation smartphones with 2560 x 1440 pixel resolution, which is the highest to date, according to the company. 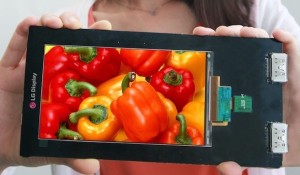 Bigger screens and higher resolutions are key ways for smartphone vendors to convince consumers to buy new devices, an opportunity LG does not aim to miss as a display supplier.

The higher resolution will, for example, allow users to see a full view of a PC-version Web page on the screen without any image distortion, according to LG.

LG calls the screen the world’s first Quad HD AH-IPS LCD panel. The quad is a reference to the fact it has four times more pixels than a screen with a 1,280 x 720 resolution.

But the new panel isn’t just about the resolution. It will also help vendors build even thinner devices. The panel is 1.21 millimeters thick, which is 12 percent less than the company’s 5.2-inch Full HD panel, which was released last month.

For now, the company is keeping quiet on when the first smartphones equipped with the screen will be launched.