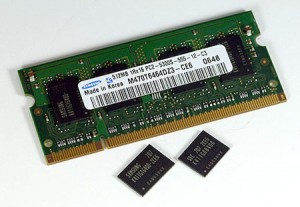 For the first time in a generation, PCs in the second quarter of the year didn’t account for the majority of DRAM sales, yet another sign that the industry is moving into a post-PC era, according to data from IHS iSuppli.

PCs in the second quarter accounted for 49% of DRAM shipments, down from 50.2% in the first quarter, IHS iSuppli said.

The market share of DRAM sold for PCs hasn’t dipped below 50% since the 1980s, when computers were new and sales were booming.

That they have lost their majority share of the DRAM market, “represents a major milestone and the arrival of a new era in technology,” IHS said in a report.

DRAM shipments for PCs will drop another 6% over the next year or so, sliding to 42.8% by the fourth quarter of 2013.

“The arrival of the post-PC era doesn’t mean that people will stop using personal computers, or even necessarily that the PC market will stop expanding,” said Clifford Leimbach, memory analyst at IHS.

“What the post-PC era does mean is that personal computers are not at the centre of the technology universe anymore — and are seeing their hegemony over the electronics supply chain erode,” he continued. “PCs are no longer generating the kind of growth and overwhelming market size that can single-handedly drive demand, pricing and technology trends in some of the major technology businesses.”

DRAM suppliers are turning their attention to serving the needs of fast-expanding new markets for smartphones and tablets, Leimbach said.

The DRAM dip is only one of several indicators that the PC industry is losing its influence. Others factors include “the declining power of the Wintel alliance, as well as Apple Inc.’s smartphone- and tablet-driven ascendency to chip purchasing leadership above traditional PC-oriented frontrunners like Hewlett-Packard,” Leimbach said.

The downturn in PC market share of DRAM has been unfolding for years; in the first quarter of 2008, DRAM sales for PCs hovered at approximately 55%.