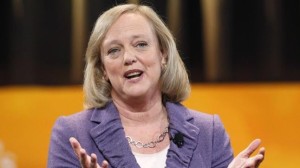 It doesn’t take much to please Hewlett-Packard’s investors these days. HP confirmed Wednesday that its revenue will decline slightly next year, but the mention of “pockets of growth” sent hearts aflutter.

HP is in the midst of a massive turnaround effort after years of leadership changes, strategic missteps and declines in its traditional PC business. It’s a profitable company, but it’s vital for HP to generate growth so that it can invest in new technologies and stay competitive.

This time last year, HP said revenue would start to increase in the current fiscal year, which ends Oct. 31. In August it backtracked and said that was unlikely to happen, and on Wednesday it confirmed its prediction.

HP expects to report a year-over-year revenue decline for its fiscal year 2014, which ends next October, though the decline “will moderate from fiscal 2013,” the company said, meaning it will fall by less.

Its promise of “pockets of growth,” however – along with shareholder dividends and an upbeat presentation from CEO Meg Whitman at HP’s financial analyst day – caused its stock to rise. Its shares were trading at $22.62 at the time of this report, up 9 percent from Tuesday’s close.

HP hurried the news out in a press release after the guidance somehow leaked earlier in the day, according to an HP spokesman at the analyst meeting. It hadn’t intended to release the forecast until its CFO addressed the analysts later in the day.

Its profit outlook for 2014 is for $3.55 to $3.75 per share, slightly higher than its range for the current fiscal year, which closes this month. Those numbers exclude one-time items, though including the items HP also expects to report a profit.

The company expects free cash flow of $6.0 billion to $6.5 billion next year, and said it will return at least half of that to shareholders through dividends and share repurchases.

HP has been saving money partly through workforce reductions. Last year it said it would eliminate 29,000 jobs by next October, plus or minus 15 percent. On Wednesday it said it expects that number to be at the high end of the range, suggesting as many as 33,000 jobs could go in total.

Whitman laid out HP’s challenges and opportunities at the analyst event. HP must expand its forward-looking businesses, including its low-power Moonshot servers, 3Par storage gear and security software, faster than its traditional businesses, like PCs and Unix servers, are contracting.

She said there are “tremendous opportunities” for HP to capitalise on trends in cloud, mobile, big data and security, but “we have got to up our game substantially about how we do things at this company,” she said.

“I would love to say we are at the end of this journey, but I have to say I am comfortable with the progress we are making,” Whitman said at the event, which was webcast.