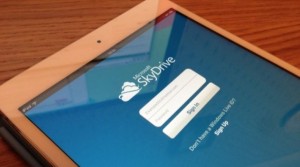 Apple and Microsoft are embroiled in a fight over the SkyDrive app for iPhones and iPads, a skirmish that has left users caught in the middle.

According to The Next Web, Apple has blocked updates to the SkyDrive app ever since Microsoft introduced the ability to purchase more storage without giving Apple a 30 percent cut of the revenue. As a result, the SkyDrive app for iOS hasn’t been updated since June. It is now missing a key bug fix that would prevent crashes.

Apple’s policy on subscription revenues isn’t a new revelation. The company first announced these rules in February 2011, and began enforcing them the following summer. In short, any app that offers a subscription plan must give a 30 percent cut to Apple in perpetuity, even if the subscriber stops using iOS devices. Apps aren’t allowed to send users to the Web to subscribe, where they would be able to avoid the fee, nor are they allowed to set higher prices through the app to offset Apple’s cut.

Services such as Hulu, Netflix and Amazon Kindle have dealt with the rules by not offering any sign-up options through their apps. If users want to sign up, they must go to a browser on their own, navigate to the service’s website and subscribe that way. Essentially, Apple’s policies have added an extra step of inconvenience for the user.

Microsoft apparently isn’t playing ball, though, and decided to try letting users subscribe to more storage through the SkyDrive iOS app. (For what it’s worth, I can’t find the option within the app itself. The app does link out to a browser-based help section, where users can eventually navigate to storage upgrade options. It also has a sign-up option that goes through the Web, but doesn’t offer any subscriptions during that process. Either of those things may run afoul of Apple’s rules.)

The Next Web, whose report cites unnamed “sources close to Microsoft,” claims that Microsoft has offered to remove all subscription options from its apps, but Apple rejected that offer. The two companies appear to be at an impasse.

Meanwhile, third-party apps that tie into SkyDrive are running into trouble. Because the SkyDrive login interface uses a Web link instead of a native view, these apps are also being rejected.

It’s hard not to draw a comparison between this disagreement and the recent Instagram-Twitter spat, in which Instagram removed direct Twitter photo integration in favor of sending users to its own website via links.

Both fights are examples of business decisions meant to keep money out of rivals’ hands, with the side effect of making things more difficult for users. Competition is generally a good thing, but in these cases the users are the ones who suffer the most.