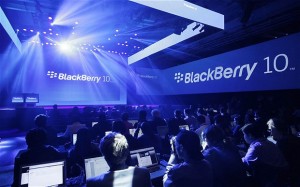 BlackBerry said this week that launch sales of its new BlackBerry 10-based handsets in Canada and the U.K. have beaten previous company records.

However, the company formerly known as Research In Motion has declined to release actual sales figures.

“In Canada, yesterday was the best day ever for the first day of a launch of a new BlackBerry smartphone. In fact, it was more than 50 percent better than any other launch day in our history in Canada,” the company said on Wednesday in a brief statement attributed to CEO Thorsten Heins.

“In the U.K., we have seen close to three times our best performance ever for the first week of sales for a BlackBerry smartphone.”

In not announcing precise sales figures, the company is taking a cue from competitors in the mobile electronics space.

Amazon has long resisted specifying Kindle sales on a unit basis, instead choosing murkier measurements like a percentage of the tablet market or “more than double” the previous year.

And when Microsoft recently launched its Windows Phone 8-series smartphones, the company proclaimed strong shipments of “over four times higher than they were last year,” but didn’t back up the claim with numbers.

BlackBerry’s Z10 smartphone went on sale in the U.K. on January 31, a day after the company unveiled the device. Sales in Canada began on February 5 and the phone is now beginning a roll-out to other countries as it passes network carrier testing.

A second phone, the Q10, features a keyboard and is due on sale in April.

The company is due to announce quarterly earnings on March 28, when it is expected to specify launch sales and quantify the consumer reaction to the BlackBerry 10 launch.