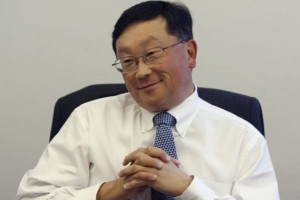 Recently-installed BlackBerry CEO John Chen is on a mission to revive the ailing company to financial health, largely by restoring faith in BlackBerry among corporate CIO’s and other traditional enterprise customers.

The former Sybase CEO has been meeting with enterprise customers since taking the BlackBerry post on an interim basis on 4th November after the departure of Thorsten Heins and a failed attempt to take the company private.

“I have spoken with carriers and CIOs and distributors and the conversation is always very positive,” Chen said in an interview with Computerworld at the International CES conference. “They see why it’s good for the market to have a successful BlackBerry. I seem to get meetings easily. They want us to be successful. There’s a lot of good will out there.”

Chen, who analysts call a no-nonsense administrator, has been busy reorganising BlackBerry’s top management. On Monday, BlackBerry hired Ron Louks, who will serve as president of devices and emerging solutions reporting directly to Chen.

Louks was most recently CEO of OpenNMS Group and previously was Chief Strategy Officer at HTC America and Chief Technology Officer at Sony Ericsson. Handpicked for the job by Chen, Louks will focus on BlackBerry’s long-term product roadmap, including hardware, software and design, along with the company’s joint development efforts.

Chen said he still owns a Sony Ericsson cell phone that Louks helped design there. “It was small and thin and had a tiny keyboard, but was not good for surfing the Web,” he said, pointing to a historical Web browsing problem with earlier BlackBerry phones.

“I hired him because I am an enterprise guy and I needed a device guy,” Chen said.

Chen agreed that if BlackBerry phones of six years ago had a browser like that in the latest Z10, Q10 and Z30 models, the company might not have fallen so far behind Apple’s iPhone and an array of Android phones.

He also agreed that the boot time on those new BlackBerry devices is “too long – we will fix that.”

Computerworld reviewed all three phones and found the average boot time exceeds 70 seconds – double that of many other new phones. Chen attributed that to the time needed to load all of BlackBerry’s famous security software.

BlackBerry hasn’t yet said what its next phone will be called or when it will hit the market, although in the months before Chen took over, BlackBerry seemed headed to developing only enterprise-class smartphones. Then, in December, BlackBerry announced a five-year strategic partnership with Foxconn to build smartphones for Indonesia and other fast-growing markets where low cost phones, sometimes with fewer features, are more popular.

“I do have a consumer play with Foxconn … especially outside the U.S. I don’t want to leave those markets, but the main focus of mine is to restore enterprise confidence,” Chen said. “For the immediate future, I’m going to be in the enterprise.”

One potential way to win back enterprise users, Chen hinted, could be with an enterprise-grade BlackBerry Messenger (BBM) service, one that uses the SMS channel as a way for companies and government agencies to have an emergency communications network during catastrophic network outages.

“I could make BBM the enterprise emergency [channel] for people who want serious” connectivity,” he said. BBM could be used for voice calls, and eventually for videoconferencing. “There’s a lot of value, a lot of stuff to deliver to customers,” he said.

Some government customers have told Chen that BlackBerry’s network stayed up when others failed during various crises and emergencies. That gives Chen confidence he can win back enterprise customers despite the recommendations from some analysts that their clients find alternatives to BlackBerry.

Part of his job is going is to convince CIO’s to take back some of the control they have lost in recent years as workers increasingly used their own devices in a sometimes chaotic bring-your-own-device world. “In some companies, the CIO has completely lost control and I’m trying to convince them they need to regain control,” Chen said. “There’s has been a loss of way.”

“BlackBerry is definitely still the most secure [mobile] solution,” Chen said. “The question is, does [argument] bring me enough business? In the long term, it will.”