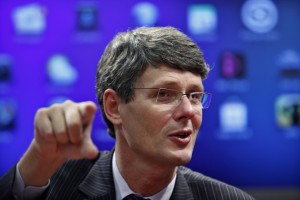 Blackberry CEO Thorsten Heins has made a bold prediction: He says that tablets don’t have much of a future.

“In five years, I don’t think there’ll be a reason to have a tablet anymore,” Heins told Bloomberg on Tuesday. “Maybe a big screen in your workspace, but not a tablet as such. Tablets themselves are not a good business model.”

Heins comments seem hard to believe at first. Tablet sales have been skyrocketing, as households phase out ageing laptops and replace them with cheap media consumption devices. This trend shows no sign of slowing down.

But a broader look at Heins’ past remarks shows a vision that actually isn’t so radical. Essentially, he believes that the smartphone will be the centre of your computing universe, and provide the processing muscle and data for a vast array of smart displays.

“You will not carry a laptop within three to five years,” Heins told the New York Times last November. “Instead, smartphones will power the PC workstations of the future, replacing laptops and desktops.”

Heins expanded on those remarks in an interview with ABC News in March: “This is not just a smartphone anymore,” he said. “This is your personal computing power. Think about what you can do with that. How many personal computing devices do you carry? Why not unify this to one device that executes all your computing needs?”

Modular computing is hardly a new idea, but it’s not ready for prime time. Asus already tried to combine phone, tablet and laptop together with the Padfone — a product that hasn’t been a huge hit. Canonical is eyeing a converged future for Ubuntu Linux, but has trouble finding OEM support. Windows 8 hybrids, meanwhile, try to bridge the laptop and tablet device with varying degrees of success, but the phone is still completely separate.

The concept won’t really take off without major advances in wireless communication that would eliminate the need for a multitude of wires and complex docking stations, along with improvements in smartphone battery life. Software must also be designed around modular computing, so a single operating system can make sense on all screen sizes.

Modular computing presents its own challenges as well. Other devices become worthless if your phone is lost, stolen, or simply placed in another room, and having everything tied to one device also means being locked into a single ecosystem.

Will fixes to those problems rear their heads within five years, as Heins suggests? Perhaps. But no matter whether Heins is right or wrong about modular PCs, keep in mind that Blackberry hasn’t ruled out making new tablets in the short-term.

Just last month, Heins said the company is thinking about how to craft tablets in a way that adds value, and not just making hardware for hardware’s sake — sage wisdom for any company that wants to live long enough to see the future of computing.