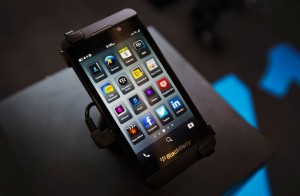 BlackBerry is mad and it’s not going to take it anymore. The smartphone maker came out swinging Friday, one day after several market analyst reports said the company’s first BlackBerry 10 handset, the touch-centric Z10, is not selling well in the U.S. The Z10 arrived in the U.S. in late March.

BlackBerry, formerly Research in Motion, takes issue with one analyst report in particular that claims Z10 handsets are being returned in record numbers. The company calls the claims “false and misleading.” BlackBerry says it will appeal to U.S. and Canadian financial regulators to investigate the report, arguing that the comments about the Z10’s return rates were intended to influence stock prices.

“When false statements of material fact are deliberately purveyed for the purpose of influencing the markets, a red line has been crossed,” BlackBerry Chief Legal Officer Steve Zipperstein said in a statement Friday. BlackBerry’s stock price took about an 8 percent dive on Thursday after dismal analyst reports about the Z10.

The Z10 return debacle began Thursday after The Wall Street Journal and Bloomberg quoted a report from Boston-based Detwiler Fenton that said Z10 return rates are exceeding sales in some cases.  “Return rate statistics show that we are at or below our forecasts and right in line with the industry,” BlackBerry President and CEO Thorsten Heins said in a statement Friday. “To suggest otherwise is either a gross misreading of the data or a willful manipulation.”

Verizon Wireless backed up BlackBerry’s rebuttal in a statement. “After the first 14 days, performance of the Z10 has been in line with similar devices we’ve launched,” the wireless carrier said.

BlackBerry and Verizon may dispute Detwiler Fenton’s findings, but the firm is standing by its report. “We are confident in our research methodology and we welcome any regulatory inquiry,” the firm’s general counsel and chief compliance officer Anne Buckley said.

In addition to Detwiler Fenton’s report, the Journal and Bloomberg also quoted ITG analyst Joe Fersedi, who said Z10 U.S. sales “started poorly and weakened significantly as the days passed.” Fersedi also claims Z10 sales are about the same or perhaps a little stronger than sales of pre-BlackBerry 10 handsets. Reuters recently quoted a research note by Pacific Crest Securities analyst James Faucette that was also negative about BlackBerry’s fortunes. While Faucette, as reported by Reuters, didn’t call out the Z10 specifically, he did say that BlackBerry 10 handsets would not return BlackBerry to “long-term profitability.”

In its most recent earnings report in late March, BlackBerry reported it had sold one million Z10 handsets after shipping the phone in several markets including the U.K. and Canada. Early U.S. sales numbers for the Z10 will be included in BlackBerry’s next earnings report this summer.