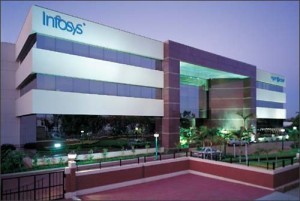 Indian outsourcer Infosys saw its profit drop even as revenue grew in the first quarter, as margins were hit by staff salary increases, and investments and acquisitions by the company in new technology areas and markets.

The company’s CEO and managing director, S.D. Shibulal, told analysts on Friday that the company had a “soft quarter.”

Infosys said it continues to be hit by an uneven economic recovery and slow decision-making by customers in its main market in the U.S. A decline in prices as customers focus on cost-cutting, and the weakening of the Indian rupee against the U.S. dollar also affected margins.

Revenue was US$1.9 billion for the quarter, up 9.4 percent from the same quarter last year, according to IFRS (International Financial Reporting Standards). Net profit fell by about 4 percent year-on-year to $444 million. Revenue growth in rupees was higher at 18 percent, while net profit grew 3.4 percent, reflecting the weakening of the rupee against the dollar.

Infosys’ revenue for its fiscal year ended March 31 was $7.4 billion, up by about 6 percent from a year earlier, while net profit was flat at a little over $1.7 billion.

The company acquired Lodestone Holding, a management consultancy firm in Zurich specialised in SAP software, in the fourth quarter of last year as it tries to build up its presence in Europe, a market that is increasingly driven by the ability to deliver services from locations within the continent.

But margins from the Lodestone business will continue to be single-digit until Infosys moves some of the work offshore to low-cost locations in India, Shibulal told a TV channel. In the meantime, the company takes a charge each quarter towards payment for the acquisition, he said.

Infosys’ results for the quarter were not in line with forecasts by National Association of Software and Services Companies, an Indian IT services trade body, which had estimated 10 percent growth in revenue from services exports in the Indian fiscal year ended March 31.

It said India’s provisioning of services to other countries will grow by 12 to 14 percent in the current fiscal year starting April 1. The kind of work that Infosys does is different, and the company’s performance cannot be compared with Nasscom estimates, Shibulal said.

Infosys added 56 clients and 1,059 employees in the quarter, taking the total number of staff to 156,688. The company has forecast revenue growth in a wide range of 6 to 10 percent in its current fiscal year to reflect the continuing uncertainty in the market.