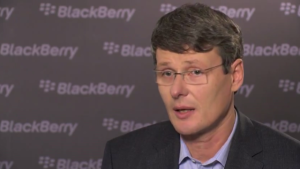 BlackBerry will change its CEO and accept a US$1 billion loan from a consortium involving shareholder Fairfax Financial Holdings as it struggles with inventory and strategy problems. The company has abandoned plans to sell itself.

The $1 billion loan takes the form of convertible debentures, exchangeable for shares at a price of $10, a 28.7 percent premium over Friday’s closing price, the company said. Fairfax has agreed to acquire $250 million of the debentures, with other institutional investors agreeing to take the rest. If all the debentures were converted, they would amount to around 16 percent of outstanding shares, BlackBerry said. In addition, the investors could purchase another $250 million of debentures, potentially raising their combined stake to 19.2 percent.

In September, Fairfax made a conditional offer of around $9 per share, valuing BlackBerry at around $4.7 billion, although it had not obtained financing for the deal at that time. The new arrangement puts a higher value on the company, but means Fairfax has to find less money to finance the deal.

The company said the deal is a “significant vote of confidence in BlackBerry and its future,” but not everyone sees it that way.

“I think it’s more of a leap of faith than a vote of confidence,” said Ben Wood, director of research at CCS Insight.

The main problem is that it doesn’t fundamentally change anything, according to Wood. It gives the company some more cash and new leadership, but BlackBerry is still a company that is finding it hard to compete with Apple and the Android camp on its own, he said.

The decision to borrow money and stay independent is in contrast to Nokia’s deal to be acquired by Microsoft.

Jack Gold, principal analyst at J. Gold Associates, had a more upbeat take on the deal.

“Although BlackBerry has enough cash to run its business for some time, given all of the cuts in operations expense it has been making, this investment nonetheless gives it more breathing room,” Gold said via email.

Gold has especially high hopes for what Chen can accomplish: “He was chief executive at Sybase during the years it had a major impact (and substantial growth) in the mobile marketplace, and he subsequently sold the company to SAP,” he said.

One of the reasons SAP acquired Sybase was to get its hands on the Afaria mobile device management platform. “John Chen knows how to manage a mobile company, and perhaps more importantly, can make things happen in the industry,” Gold said.

One thing the statement issued on Monday lacked was any indication of what Chen plans to do to turn around BlackBerry; whether, for example, he will stick with the strategy the company announced in September, which called for it to reduce the number of devices and focus more on the enterprise.

“Right now there are no real answers for Blackberry, and that is a very uncomfortable place to be for investors, customers, workers and partners,” technology industry analyst Jeff Kagan said via email.