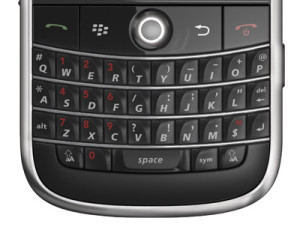 BlackBerry has filed a copyright infringement suit against a company co-founded by Ryan Seacrest that makes a keyboard case for the iPhone.

On Friday the struggling smartphone maker filed a lawsuit against Typo Products LLC, a company that makes a slip-on keyboard designed to fit the iPhone 5 and 5S. The company, which is based in Los Angeles, was founded by entrepreneur Laurence Hallier and television personality Ryan Seacrest. The company’s flagship product, the “Typo Keyboard,” was conceived to make typing on the iPhone quicker and less prone to typos.

Now the company might be wishing it went a little slower. The keyboard, BlackBerry alleges, violates the company’s intellectual property rights for copying BlackBerry’s own keyboard designs.

Instead of developing its own design, “Typo chose to copy BlackBerry’s iconic keyboard design as embodied in, among others, BlackBerry’s Q10 smartphone,” the lawsuit alleges, which was filed Friday in the U.S. district court in the Northern District of California.

“This is a blatant infringement against BlackBerry’s iconic keyboard, and we will vigorously protect our intellectual property against any company that attempts to copy our unique design,” said Steve Zipperstein, BlackBerry’s general counsel and chief legal officer, in a statement.

The suit seeks a trial by jury to obtain compensation for the copyright violation.

On Saturday, Typo issued a statement in response to the suit. “We are aware of the lawsuit that Blackberry filed against Typo Products. Although we respect Blackberry and its intellectual property, we believe that Blackberry’s claims against Typo lack merit and we intend to defend the case vigorously. We are excited about our innovative keyboard design, which is the culmination of years of development and research,” it said. The statement added that the company plans to go ahead with its launch at International CES in Las Vegas and is on track to begin shipping pre-orders at the end of January.

BlackBerry might have a case. Typo’s keyboard does bear some resemblance to the keyboard on the Q10: Both keyboards have sculpted keys laid out in straight horizontal rows.

BlackBerry still has a way to go, however, in its efforts to restore the company’s fortunes. Previously a formidable player in the mobile device market, the company in recent times has seen its sales drop as other smartphone companies like Apple and Google have gained popularity with consumers.

BlackBerry’s revenue in the September to November quarter of last year was US$1.2 billion, down 56 percent from the previous year. In December BlackBerry said it would be working with electronics manufacturer Foxconn to jointly develop some BlackBerry phones.

Typo, meanwhile, may have some marketing strategy problems of its own. On its homepage, a video for its keyboard product offers an ironic message, given the lawsuit from BlackBerry: “Sometimes we have to go backwards to go forwards,” it said.

The company’s product is designed to bring back 40 percent more screen space to the iPhone for typing.