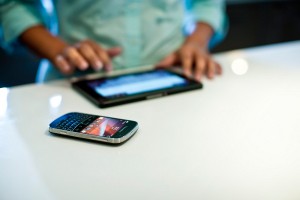 BlackBerry last week announced technology designed to securely separate work and personal data on Android and iOS smartphones and tablets, as its Balance software does for new BlackBerry 10 devices.

The new Secure Work Space for iOS and Android will be sold separately to run as an update to BlackBerry Enterprise Service 10. A closed beta test recently began with enterprise and government customers; the software will be generally available by June 30, officials said. Pricing has not been announced.

He said Secure Work Space will work somewhat differently on iOS and Android devices than Balance does on BlackBerry’s new Z10 and Q10 smartphones, which were announced in January.

Separating work and personal data on a device is often called “containerisation” or creating a “dual personality.” In the case of Balance, the separation is built into the core of the BlackBerry 10 operating system. Work email and apps are securely separated from personal email and apps, but they can be merged in a virtual way in a single calendar view, for example, Devenyi said.

For Android devices, Secure Work Space will work in a similar fashion: Users will be able to see work data and personal data on different wallpaper, and they will have the ability to toggle between the two, he said. However, Secure Work Space won’t support a common virtual view of the two on Android as Balance does with BB10.

With Secure Work Space on iOS devices, the secure work-related apps will reside on the user’s home screen, where they will have a lock icon to indicate they are virtually part of a work space, Devenyi said. The differences in the way it works on iOS and the way it works on Android are due to “limitations from the device,” he said.

“Bring-your-own-device [policies are] a reality, and while we expect to get a very significant piece of the pie, it’s a heterogeneous world out there,” said Devenyi, referring to the fact that many organisations now allow employees to use their personal smartphones for work – a trend that has resulted in many businesspeople opting for Android and iOS devices over BlackBerries, which traditionally were the choice of enterprise IT shops.

Devenyi said Secure Work Space will save IT shops effort and expense since they won’t need to operate VPN systems to manage devices from behind the firewall. As a company creates or finds new applications for workers, those apps can be secured and added to the devices, without the need to modify source code.

Rob Enderle, an analyst at Enderle Group, issued a statement saying Secure Work Space is stronger than systems from other vendors when it comes to securing various mobile platforms.

Jack Gold, an analyst at J.Gold Associates, said Secure Work Space will help BlackBerry “keep enterprises vested in keeping and using BES, instead of unplugging and buying” other software, such as mobile device management software from Airwatch, MobileIron and other vendors. Also, if a company keeps BES installed, it might be easier for BlackBerry to sell the company or its workers on BlackBerry devices like the Q10, he added.

Devenyi said while Secure Work Space is for Android and iOS, BlackBerry is open to supporting Windows Phone should customers widely request that.

More details on Secure Work Space will be announced at the BlackBerry Live conference from May 14 to 16 in Orlando.

Balance with BB10 is supported by BES10 in both the Z10 and Q10 smartphones.