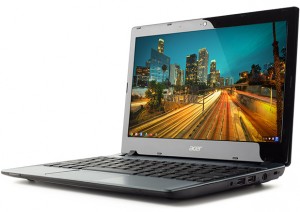 There appears to be no end to the Chromebook phenomenon, which has seen PC maker after PC maker jump onto Google‘s Chrome OS-powered bandwagon.

Samsung, Acer, Lenovo, and HP have all joined the fray, and this week Acer expanded its own offerings with yet another entry.

Following up on the $199 Acer C7 that was introduced in November, the company on Tuesday unveiled another device in the same C7 line that targets education users with a beefier model priced at $280.

“Chromebooks are an ideal option for schools and districts that want to quickly implement a technology program that will significantly enhance student learning,” said Gregg Prendergast, vice president of U.S. commercial sales for Acer America. “The Acer C7 Chromebook is even more affordable when schools consider the reduced total cost of ownership thanks to its manageability and security features.”

Now, the new Acer C710-2055 is available with an Intel Celeron 847 processor and 4GB of RAM, as opposed to just 2MB in the older model. A six-cell battery, meanwhile, delivers up to six hours of ongoing power, which is a significant improvement over the original C7’s mere 3.5 hours.

The new C7 weighs just over 3 pounds with a thickness of one inch. Also included are an HD 1.3MP webcam, three USB 2.0 ports, an HDMI port, and an 11.6-inch HD widescreen LED-backlit LCD. The C710-2055 device is now available in the United States at retailers and from authorized Acer resellers.

It’s no secret that Microsoft‘s Windows 8 is struggling, and that hardware vendors relying on it are struggling right along with it.

Linux-based Chrome OS, meanwhile, has propelled Samsung’s $249 Chromebook into the top spot among laptops on Amazon. Acer’s Chromebooks now account for 5 percent to 10 percent of the company’s U.S. shipments.

Then, of course, there’s the $1,300 Chromebook Pixel, a high-end offering from Google that recently got an enthusiastic endorsement from none other than Linux creator Linus Torvalds himself.