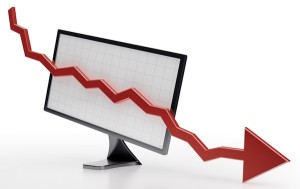 This year will go down as the PC industry’s largest contraction, research firm IDC said Monday, with global shipments dropping by double digits and little relief in sight.

The dismal numbers will not be welcomed at Microsoft, which sells the bulk of its Windows licenses to computer makers as they assemble new PCs.

The new forecast was the third reduction in 2013 expectations by IDC, which started the year thinking that the decline would be just 1.3%. With each revision, the research firm’s projections became gloomier, first in May when it predicted a 7.8% contraction, then again in August when its analysts said the decline would intensify to 9.7%.

If IDC’s latest prognostication is accurate, Asian factories will ship about the same number of PCs to distributors, retailers or OEMs as they did in 2009, two years before “peak PC,” when PC shipments reached nearly 364 million before starting a 24-month-and-counting slump.

The downturn will continue through 2014, IDC maintained Monday, when PC shipments will fall another 3.8% to around 302 million – like the 10.1% drop this year, a larger decline than the August estimate – before recovering ever so slightly over the next several years. But for the foreseeable future – at least through 2017 – shipments will hover just north of 300 million, or about the number delivered in 2008.

“Beyond 2017, at this time we don’t have reason to think the market would take off in double-digit year-over-year growth,” said Jay Chou, one of the IDC analysts who works on the PC tracking team.

The last time PC shipments climbed by double digits was in 2010, when year-over-year growth was a robust 13.7%.

Other than computer component suppliers and PC makers, Microsoft will be the company hit the hardest: sales of its Windows operating system are almost entirely reliant on new PC sales. Last quarter, for example, Microsoft said that OEM-based Windows revenue declined 7% overall, nearly the same as the drop in PC shipments for the quarter measured by IDC.

How bad are the revised forecasts for Redmond? “Pretty bad,” said Chou. “Even with lower penetration, emerging regions will be down through 2014,” he added, talking about developing countries that had been driving PC shipment growth.

Microsoft has been betting on Windows 8 – and its free update, Windows 8.1 – to revitalise the industry, or at the least drive enough shipments of new designs, including so-called “2-in-1” hybrids that function as both notebook and a slate-style tablet, to make up for the PC slump.

The former looks impossible at this point, said IDC, although there was hope for the latter when Windows-powered 2-in-1s and tablets are added to the mix.

“The emergence of 2-in-1 devices – many of which will run Windows – along with Windows-based tablets, is expected to provide some new volume for the Windows platform … in coming years,” Loren Loverde, also of IDC, said in a statement yesterday.

“But at this stage, we don’t see a substantial impact” from either 2-in-1s or tablets running Windows, Loverde added in a Tuesday interview.

Like many other market research companies, IDC has wrestled with how to integrate shipment forecasts of new form factors, including convertible 2-in-1 devices and tablets, with traditional PCs. Currently, it includes neither in its PC estimates; instead it tracks tablets separately and will soon do the same for 2-in-1s.

The problem is that while 2-in-1s may resemble PCs – and may be used as PC replacements by some – tablets are usually not. Loverde cited the prominence of smaller-sized tablets, and their content consumption orientation, as one reason why including them in PC calculations muddies the water.

There is hope for Microsoft, said Loverde: By 2017 Windows tablet shipments should stand at 39 million units, up dramatically from around 7.5 million this year. Windows-based 2-in-1s, as demonstrated by Microsoft’s own Surface Pro, also hold promise.

Even so, IDC kept its outlook conservative. “There’s some potential for Windows-based 2-in-1s, but the Windows tablets on the market have limited traction so far,” said Loverde. “Thirty-nine million [tablets in 2017] is a nice number, but considering the number of total PC shipments, it’s not a lot of growth.”