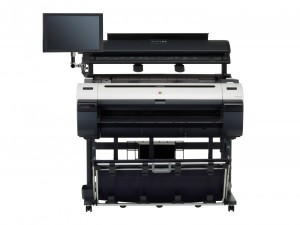 Canon on Thursday announced the Middle East launch of its imagePROGRAF MFP M40 Solution, a total workflow system built for large-format printing, scanning, archiving and for sharing colour and black and white documents.

The system includes a Canon imagePROGRAF large-format printer and a new M40 scanner, which is incorporated with an integrated stand. It also comes with what Canon calls “powerful” MFP software and a 22-inch touchscreen interface with dynamic preview.

Canon said that the package is ideal for any size of workgroup that uses technical documentation. Those in the architecture, engineering and construction markets would be particularly interested, the brand said, though it also asserted that there are more applications for the solution.

“Previously, architects, engineering and construction industries were the primary users of large-format scanning and printing. However, as more and more diverse applications have appeared, we expect the market to grow accordingly,” said Hendrik Verbrugghe, Marketing Director, Canon Middle East.

The new MFP incorporates scan-to-copy, file, email, cloud connectivity and print functions, meaning it should meet the requirements of demanding CAD or GIS users. Canon claimed that it is capable of scanning images up to 40 inches wide at speeds of up 13 inches per second in monochrome.

Canon pointed toward the new arrangement of its Contact Image Sensor (CIS), which, it said, ensures images are captured with accurate, shadow-free line definition at true 1,200 dpi optical resolution.

The firm also said that its new “hot swap” ink tank technology enables the ink to be changed without interrupting the print job.

In terms of the software, Canon said that its SmartWorks MFP is capable of batch scanning and offers support for file types such as PDF, JPEG and TIFF. Some variants of the solution come with a 250GB hard drive, too.

The new M40 is compatible with five large-format printers from the Canon imagePROGRAF range, including the iPF750, the iPF815 and the recently launched iPF760 and iPF765.