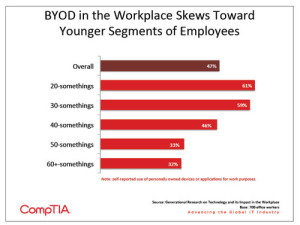 Despite rumours swirling in Silicon Valley that the BYOD phenomenon is losing its buzz, CIOs who think they can abandon the practice risk upsetting an important and growing constituency of their workforce: millennials, also known as Generation Y.

BYOD in the workplace skews toward younger segments of employees, according to a new report from CompTIA. Nearly two-thirds of millennials use a personal device at work compared with just a third of Baby Boomers. Six in 10 workers in their 20s and 30s used a personal device or app for work.

“Taken in the aggregate, there’s a near-even split of all workers that incorporate personal tech into work and those that do not,” the CompTIA report states. “Looking more closely at the demographic breakdowns, however, it’s abundantly clear that this practice is far more prevalent, and presumably valued, by younger workers.”

There’s no question that millennials want employers to support BYOD, and CIOs better cater to their needs. Why are millennials so important? By 2015, they’ll make up the largest segment of the workforce, according to the US Bureau of Labor Statistics.

CompTIA calls it a seismic shift in generational make-up, one with an interesting twist. As the 50-and-over Baby Boomers retire, they are being replaced by 20-to-34-year-old millennials. Meanwhile, the 35-to-49-year-old GenX-ers are relatively few in number. This means that millennials will leapfrog GenX in the workplace.

Already, Silicon Valley tech companies are fighting to hire millennials. They’re pitching technology flexibility, such as BYOD, and other perks to woo them. Last month, tech executives gathered at a Commonwealth Club event in San Francisco to discuss the future of the workplace, particularly millennials and their love of technology for work and play.

CompTIA’s report offers some insight into the millennial mindset when it comes to reliance on technology:

CIOs will play an important role in recruiting millennials to their companies. Consider this drive-by stat: CompTIA found that three out of four men, ages 20 to 49, consider a potential employer’s level of tech-savvy a significant factor in choosing to work there.

This means CIOs will need to showcase their company’s tech coolness factor and flexibility to appeal to GenY, and BYOD can help. Millennials not only rely on technology, they often feel clunky and dated corporate-issued devices and apps don’t play to their strengths. BYOD is an option for them to use the technology of their choosing.

Put another way, two-thirds of Millennials assessed their own technology acumen as “cutting edge” or “upper tier,” according to CompTIA, and CIOs will have to cater to this type of customer.