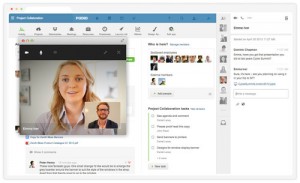 Citrix has added instant messaging to its Podio enterprise collaboration product so that employees can engage in one-to-one and group text chats while they work on tasks and projects.

This summer, Citrix will extend Podio Chat with audio communications and video conferencing, expanding the real-time communications features of the product.

“Now you can chat within Podio in the context of your work,” said Bernardo de Albergaria, vice president and general manager of SaaS products and markets at Citrix.

Also in the works is an integration between Podio and Citrix’s Go To Meeting web conferencing and online meeting product, he said.

Podio customers can choose to install business applications built for the product by Podio and by third-party developers, as well as create their own custom applications using the product’s drag-and-drop development tool, which the company says is simple enough for non-programmers to use.

Citrix believes this gives Podio differentiation in the market, because it meshes work applications with the collaboration functionality. Other collaboration software exists alongside line-of-business applications, forcing users to toggle between, say, a wiki where a group is discussing accounting issues and the actual accounting software needed to act on the discussions.

“Podio is a place where you get work done,” de Albergaria said.

The question is whether the Podio applications, built natively for the product, will in most cases be powerful enough to stand in for commercial business applications.

De Albergaria acknowledges that the Podio applications are meant to offer “lightweight workflows that facilitate getting work done,” but said that they might meet the needs of between 80 percent and 90 percent of companies and business scenarios. In addition, data can be imported to and exported from Podio applications to third-party software, he said.

Podio is designed for small- and medium-size businesses, as well as teams within large organisations.