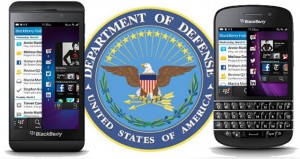 The U.S. Department of Defence has cleared BlackBerry 10 smartphones and PlayBook tablets for use on its networks, amid reports that the department may also clear devices from Samsung Electronics and Apple.

The department has approved BlackBerry 10 smartphones and PlayBook tablets with its enterprise mobility management platform, BlackBerry Enterprise Service 10, to be used on its networks, BlackBerry said Thursday.

After testing through DoD labs, the devices have been listed in the Defence Information Systems Agency’s Unified Communications Approved Product List. DISA, which manages the information infrastructure for defence, certifies commercial technology for defence use.

BlackBerry said in March it shipped about 1 million BlackBerry Z10 smartphones during its fiscal fourth quarter which ended March 2. The Z10 is the first BlackBerry 10 OS device. BlackBerry shipped a total of 6 million smartphones in the quarter, the company said as it released its quarterly earnings.

The current approval from the department covers the BlackBerry Z10 and Q10 smartphones and PlayBook tablets on DoD networks, which will likely give a boost to sales of these devices, which the company is counting on to revive its business. The Q10 is already available in the U.K. and Canada, but not yet in the U.S.

The DoD, however, expects to give security approvals in the coming weeks for Samsung’s Galaxy smartphones and iPhones and iPads running Apple’s latest operating system, The Wall Street Journal reported this week.