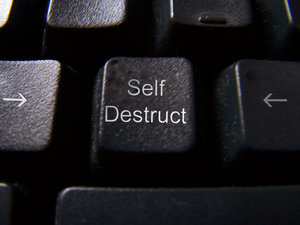 The popular Snapchat photo-messaging app used mainly by Android and iOS mobile device owners to share images that then self-destruct after 10 seconds is the sort of security idea that businesses say can help them secure online transactions with business partners.

“It puts controls on what people see, and I can put expiration dates on sensitive documents,” says Marc McDonald, owner of Chicago-based Midland Metal Products that a few months ago started using the software-as-a-service called VIA from Intralinks Holdings that now lets the maker of store fixtures share computer-aided design files for custom manufacturing with business partners. Midland Metal Products restricts download of sensitive information and also sets a time for the files to self-destruct. McDonald says the password-controlled VIA option is simpler and has more security controls than the Dropbox option he’d previously used.

While Intralinks sometimes casually refers to the collaboration service, which is priced at $25 per user per month as a “Snapchat for the enterprise,” it’s not related to the real Snapchat, which was launched in September 2011 by Stanford students Evan Spiegel and Bobby Murphy as a way to share “impermanent photos” taken on mobile devices through their Snapchat  app.

After a short period of time, each Snapchat image is said to be deleted from the devices and the Snapchat servers. The still-evolving Snapchat service, which has started to receive venture-capital funding, is proving popular with teens and young adults that now send millions of Snapchat photos and videos each day. Snapchat is also starting to be noticed in business circles in connection with questions about whether unauthorised photos and images of sensitive business information are being sent via mobile devices.

“We’ve been getting a lot of inquires about Snapchat apps,” says Jason Novak, assistant director of digital forensics at Stroz Friedberg, the New York-based firm which focuses on cyber crime issues and providing digital evidence that will stand up in court, if need be.
One big question is whether Snapchat does leave any trail of evidence of use on a mobile device. Stroz Friedberg says its forensics analysis can detect a trail of use of Snapchat  for the Apple iPhone, though not evidence of specifically what photos or videos were sent. It hasn’t yet completed forensics for Snapchat on an Android device.

In its digital forensics tests it did with Snapchat for the iPhone, Stroz Friedberg found Snapchat maintains what’s called the user.plist file, which is not encrypted. The file is a way to identify, preserve and analyse that the user of the iPhone did send something to a recipient via Snapchat. Novak says it’s possible to clear the Snapchat plist file on the device if the user knows how.

He points out that other Snapchat-like services oriented toward mobile have sprung up – such as Facebook’s Poke, as well as Wickr and Silent Circle, which take advantage of encryption as well. These type of services are presenting digital forensics with new challenges, Novak notes. Mobile devices such as smartphones and tablets that use these type of services remains a new and evolving field beyond traditional computer-based forensics which is now more automated.