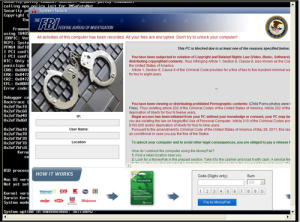 A persistent, widespread malware campaign that utilises compromised Apache servers is locking users’ computers and demanding a fee of $300 to free their data.

Researchers from Eset wrote that the ransomware scam is an extension of a long-running attack that compromises the infrastructure of Web hosting companies with a variant of a malicious Apache module called “Darkleech”.

“Malicious modification of server binaries seems to be a very popular trend for malware distribution,” wrote Sebastien Duquette, an Eset malware researcher, on a company blog.

Eset also suspects that hackers also may have figured out how to compromise CPanel and Plesk, which are both software programs used by hosting companies to manage their networks and websites.

Darkleech tampers with websites hosted on an Apache server. It loads an iframe into a web page and redirects a victim to a malicious URL that hosts the Blackhole exploit kit, Duquette wrote. Eset detected at least 270 websites that redirected victims this way in the last week.

The Blackhole kit then tries to exploit unpatched Web browsers or vulnerable Java or Adobe Reader plugins in order to install malware. If an exploit is successful, several pieces of malware are placed on the victim’s computer, Duquette wrote.

One of those malware programs, called Nymaim, locks the victim’s computer and asks for a fee. Duquette wrote the Nymaim ransomware campaign, which has been running for a long time, is customised according to the approximate location of the user. US-based users, for example, see a bogus warning from the US Federal Bureau of Investigation.

It appears attackers are still having much success using the Blackhole exploit kit. As many as 40,000 IPs have been used in campaigns, and in May alone, 15,000 IP addresses were serving up the kit at the same time, Duquette wrote.

“Given how successful these campaigns have been so far at redirecting massive amounts of visitors it is hardly surprising to see these abuses on the increase,” Duquette wrote.