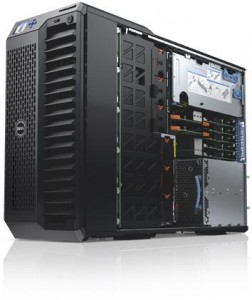 With a paradigm shift towards converged infrastructure emerging, two of the biggest players in the market — Dell and HP — are determined to take a market lead to offset the rapid losses they have both experienced in their respective PC divisions.

Last month, Dell reported a 79% plunge in profits for the quarter ended May 3, as CEO Michael Dell continues his fight to take the company private.

The company hopes targeting a converged solution toward the SMB space — with the launch of Dell PowerEdge VRTX — will aid much-needed growth by capitalising on the service and software capabilities it has built in recent years.

Converged infrastructure solutions bring together networking, servers and storage into a single chassis, meaning all components are controlled by a single management console. Having just one console and vendor simplifies IT for the end user by eliminating the complexity, cost and sprawl of having disparate external devices and multiple management tools. IDC has predicted spending on such systems to grow by over 54 percent between 2011 and 2016.

However, all the major vendors have so far only released converged solutions that are built for larger enterprises, many of which face difficulty in migrating away from existing setups, according to Basil Ayass, Marketing Director, Dell ME.

“At GITEX last year, we showcased what we called Dell vStart,” said Ayass, who spoke to CNME at the launch in Dubai. “It’s a half rack, it starts at $70,000 and goes all the way up to $200,000, and it’s for large enterprises, because I believe we thought convergence was an enterprise play.

“But what we’re seeing is that SMBs are adopting convergence, to simplify their lives. With SMBs, you’re starting with a greenfield and a very small investment, so it’s very easy for them to adopt convergence.

“What we’re doing differently is, for the first time, we’re now introducing something that is converged to SMBs. All the major vendors have converged solutions that are much larger.”

Dell’s portfolio expansion also includes the next wave of its converged infrastructure offerings, Active Infrastructure 1.1, which adds new validated workshops, a broader portfolio of pre-integrated systems, and enhancements to the unified management platform.

PowerEdge VRTX will be available worldwide on June 26, whilst Active Infrastructure is expected around the same time in the Americas and select countries in EMEA and APJ.