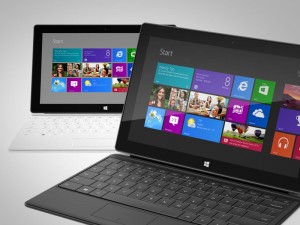 The company should instead focus on the more robust Windows 8 and ditch Windows RT, the analyst said.

Tom Mainelli, IDC’s research director for tablets, said Microsoft’s decision to pitch both operating systems as tablet-ready has not worked. “Two OSes for tablets has resulted in confusion on the consumer side,” said Mainelli in an interview. “Microsoft has had a difficult time spelling out why consumers would choose Windows RT over iOS or Android.”

Mainelli isn’t the first analyst to call out Microsoft for its decision to split its tablet attack – similar criticisms were levelled from the start – but IDC’s estimates of future sales adds extra weight to his take.

According to IDC’s forecast, Windows RT tablets will end 2013 with only a 1.9-percent share of the year’s shipments, or 3.6 million devices out of total of 190.4 million. That’s not much more than Apple sold in three days after the iPad Mini launch last fall.

In comparison, 93.2 million Android tablets and 87.8 million iOS-powered iPads will ship this year, as Google‘s mobile operating system takes the top spot for the first time.

Rather than devote time and energy to Windows RT, Microsoft should put its tablet bet on Windows 8, the full-featured OS. “People may not love Windows 8, but it’s compatible with the software they’ve always run,” Mainelli said. “RT may look like Windows, but in fact it’s not.”

Windows RT devices can run only Windows Store apps, those written for the WinRT API (application programming interface), and cannot run so-called “legacy” software, the kind that users are familiar with and that work in Windows XP, Vista and Windows 7.

Microsoft allows its own Office and Internet Explorer to run on restricted “desktop” on Windows RT, but bars others from doing the same.

Windows 8 tablets will capture 2.8 percent of the market by the end of 2013, IDC estimated, representing 5.3 million units. But by 2017, when Windows RT still sports a flagging share of 2.7 percent – 9.5 million of the projected 350 million tablets for the year – Windows 8 will have more than doubled its share of the market, climbing to 7.4 percent, or 25.9 million devices.

Even after five years on the market, IDC expects Windows RT to have just 2.7 percent of the tablet market, one reason why it encouraged Microsoft to ditch the OS.

Microsoft’s OEM (original equipment manufacturers) partners have been just as bearish on Windows RT as IDC. In January, Samsung – a key tablet maker – said it wouldn’t release a Windows RT device in the U.S. And earlier this month, the South Korean electronics giant confirmed it was pulling its Windows RT-powered Ativ Tab from European sales channels.

Mainelli stopped short of saying Windows RT was a flop – “It’s not a bad product,” he argued – but said it was clear Microsoft made the wrong design choice, then followed with muddied marketing.

Microsoft famously decided on a different path, instead taking a subset of its Windows desktop operating system, porting it to the ARM processor architecture, and calling it Windows RT.

“Consumers aren’t buying Windows RT’s value proposition, and, long-term, we think Microsoft and its partners would be better served by focusing their attention on improving Windows 8,” said Mainelli in a statement accompanying IDC’s revised tablet forecast. “Such a focus could drive better share growth in the tablet category down the road.

“As new processors come along, Microsoft should make a big push that Windows 8 is its tablet OS. That has the potential to have legs.”

But Microsoft could take another tack, Mainelli acknowledged, citing the quick shift in tablets to devices with eight-inch screens or smaller. This quarter, more than half of all tablets shipped will be of that size.

“We may see Windows RT shifted to tablets of smaller sizes and lower prices,” Mainelli speculated.