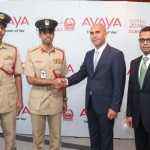 Those with remote access to a computing device will still be able to benefit from SmartConnect services via smart self-service stations to be introduced in public places soon. Also the first to introduce such stations, Dubai Police intends to equip the kiosks – similar to ATMs – with a videoconferencing functionality.

Nidal Abou Ltaif, President, Avaya – Global Growth Markets, said, “Our partnership with Dubai Police exemplifies how the UAE is leading a paradigm shift towards smart governance, with an aim to stimulate innovation, growth and prosperity.  Avaya prides itself with a longstanding partnership with the government of the UAE and its entities and for having the opportunity to play a role in transforming the vision of its leaders into a living reality.”

Avaya intends to take the solutions live at the GITEX, following which these similar solutions will be introduced across other government bodies. Mohammed Arref, MD, Avaya – GCC, Levant, Iraq, and Pakistan said, “Seventy percent of government call centres already run on Avaya technology of which RTA and Etisalat have the widest deployments to date. Moving either of the two to SmartConnect should be seamless,” Mohammed added.

The solutions will be displayed at the Dubai Police and Avaya stands at GITEX taking place at the Dubai World Trade Centre from 12-16 October.