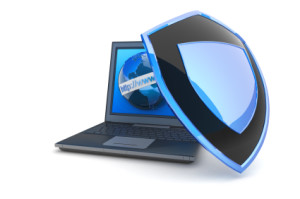 In terms of enterprise anti-virus protection, Dennis Technology Labs said the most accurate product was Kaspersky Endpoint Security for Windows, followed by Symantec Endpoint Protection. Other products tested in this enterprise group included McAfee VirusScan, HIPS and SiteAdvisor; Microsoft System Center Endpoint Protection; and Trend Micro OfficeScan and Intrusion Defense Firewall. The labs called the Microsoft product the least effective on computers, which were “compromised by 18 percent of the threats”.

According to the report from Dennis Technology Labs, in its test environment, tested enterprise products “were exposed to Internet threats that were live during the test period. The exposure was carried out in a realistic way, closely reflecting a customer’s experience. These results would have happened if a user was using one of the products and visited an infected website.”

The lab also noted most of threats originated from websites considered legitimate, not operated by  criminal organisations.

Even the top-ranked Kaspersky was compromised once. The testing method also looked at how well products identified legitimate software.

The lab pointed out none of the products had a 100 percent protection rate and in its test report conclusions pointed out that “anti-virus is important” but “is not a panacea” for security problems related to malware. “The tests showed that even with a relatively small sample set of 100 threats, there is a significant difference in performance between the anti-virus programs,” the lab said.

“The effectiveness of small-business anti-malware software and services is generally good,” said Dennis Technology Labs in its report. “Although every product was compromised at least once, most protected the system in over 90 percent of the cases.”

Symantec was ranked best at 99 percent, and Sophos Anti-Virus Business, compromised by 17 percent of the threats, was deemed the least effective.

Symantec Endpoint Protection Small Business Edition 2013 was deemed the “most  accurate program” overall, and the only product to get the test lab’s top rating in this round of tests. Kaspersky Small Office Security and Trend Micro Worry-Free Business Security Services were close behind.

“The effectiveness of free and paid-for anti-malware security suites varies widely,” the Dennis Technology Labs report states. “McAfee’s paid-for and Microsoft’s free product were the least effective.” The report said McAfee Internet Security was “compromised by
18 percent of the threats”.

The Avast! Free Antivirus 7 was deemed the most effective of the free anti-malware software in the group tests. But in this test round, the top three products were all paid-for: Kaspersky, BitDefender and Symantec’s Norton software.