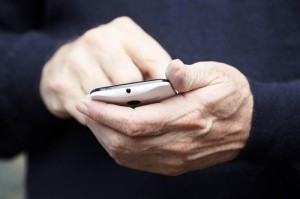 Google’s Eric Schmidt has set tongues wagging yet again, but this time it’s not about what he said but what he didn’t say. The search giant’s Executive Chairman was spotted at the Allen and Co. media conference on Thursday using a mysterious Motorola smartphone that looks awfully similar to leaked pics purporting to be the upcoming Moto X smartphone.

The annual event held in Sun Valley, Idaho is crawling with journalists, so this is not a place you want to be sporting a highly-anticipated phone that you’re trying to keep secret. Unless, of course, you’re not trying to keep it secret. Schmidt’s comments on the phone were deliberately sly and playful.

“I’m not allowed to comment on the nature of this phone,” Schmidt said, according to a tweet from Variety’s Rachel C. Abrams. In the photo accompanying Abrams’ photo, Schmidt can be seen basically posing for reporters with the ‘Moto X’ in hand. A caption accompanying a separate Reuters snap of Schmidt said flat-out that the phone in his hand was the anticipated Motorola device.

Motorola’s X factor
The Moto X will be the first directly Google-influenced smartphone from Motorola since the search giant picked up the phone maker in 2011. Leading up to the recent July 4 weekend, Motorola took out full-page ads in several major newspapers across the US hyping the Moto X as the “first smartphone you can design yourself“.

It wasn’t immediately clear if Motorola was suggesting you’d actually be able to influence the hardware specs – an idea that has failed spectacularly in the past. But reports currently suggest the Moto X’s customisation will be little more than the ability to order engraving, select from several colour options, and personalise the device’s wallpaper. The phone’s specs aren’t all that exciting either, rumoured to include a 1.7GHz dual-core processor, 2GB RAM, 4.6- or 5-inch display at 720p resolution, and a 10-megapixel camera.

With average specs and somewhat lame personalisation options, there is some suggestion the Moto X’s biggest selling point will be how the device uses its sensors. During a talk in May, Motorola chief Dennis Woodside said the Moto X would change its interface based on what you were doing with the phone, such as taking it out of your pocket or driving.

But this isn’t exactly a new feature either. Proximity sensors that turn off your smartphone’s display to prevent misdials or hang-ups when the handset is near your ear are standard. The latest version of Nuance’s Dragon Mobile Assistant has a driver mode that is supposed to detect when you’re driving and automatically start accepting voice commands. Other apps, such as the newly Google-purchased Waze, can also detect when you’re driving and prevent you from fiddling with the app while on the move.

Nevertheless, the first Google-influenced phone from Motorola is a device worth paying attention to – if not for the handset’s wow factor, then for hints about what Google has planned for Android. The Moto X is expected to become available later this summer.